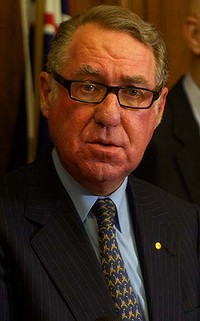 Of course the Gonski Review of the Australian education system found “school performance has slipped over the past decade”.  It undoubtedly has gone backwards.

It’s clearly also slipped off the educational radar that previous hardworking generations of (far fewer) Australians managed to build dams, highways, bridges and ports from the uplift in values capital works gave to their land values.

In this brave new “post industrial” era, however, our education system and think tanks (the likes of the Institute of Public Affairs) believe it’s quite OK for Australia’s publicly-generated land rents to be delivered to corporate ‘entrepreneurs’.

Curiously, now that we’ve wound back knowledge and use of our natural resource rents, we find we’re short of funding for such infrastructure, for education, health and public housing. Where are the funds to come from? Indeed, from whence shall come the extra $5 billion per annum David Gonski says we need to rectify Australia’s educational problems?

Oh, they’ll have to come from more taxes which will impede labour, capital, thrift and exchange – isn’t that obvious? Our education system tells us municipal rates and land taxes have had their day: they’re passé – even if, unlike other taxes, they don’t add to costs.

Once it was considered the public duty of landholders to pay for public works  in proportion to the increase in the value of their landholdings, but we’ve been ‘educated’ to believe that “user pays” is superior to “beneficiary pays” and been dudded accordingly by this gaping hole in our educational system.

So, the corporates may now control our natural monopolies such as gas, electricity, airports and highways and, in so doing, may capture our economic rents.  Our infrastructure must now be funded, not from government bonds nor from rates and land taxes, but from unholy public/private partnership (PPP) alliances which deliver our publicly-generated land rents to these parasites.

Education. This was Julia Gillard’s area of expertise, her specialty. But do you think she understands natural resource rents, or the great public dividend they might still deliver?  I doubt it.  So, can any doubt exist that in the study of economics Australia’s education has retrogressed sadly?

Our forebears worked hard for public works and amenities which have increasingly been allowed to be plundered and privatised.  You could bet when they’d finished with Julia Gillard and Tony Abbott, these brave souls would have taught them a thing or two!

Yep, David Gonski, we most certainly do need to improve education.

One thought on “GONSKI”