In the last few days my spouse and I ventured to Western Australia for a totally enjoyable family celebration. (I even took a break from my notebook!)

Perth is as modern and brash as ever, the young blokes switching lanes and tailgating in their Ford and Holden utes with a manic fervor still only rarely seen in Melbourne.  Perth – the West generally – is on the move, cranes still doing their thing on the skyline of the CBD, but property values are now on the decline.

Further south, I couldn’t believe the extent of prestigious new homes and apartments exhibiting their best aspect to Bunbury’s inner and outer harbours.  Many were obviously occupied, but could there possibly be buyers for all the rest of them?

South again, Busselton wasn’t as aggressively developmental, but there were also some particularly attractive homes in that attractive little city.

We stayed at Pier 21 on the Swan River at North Fremantle on the way back to Perth, overlooking the footpath and marina.

Not as enjoyable as the family gig, but certainly another feature of the trip was running into a local walking his dog near the Freo Water Police building as we walked along beside the Swan.

“Is there a place nearby where we can get a bite?” I inquired. “Yes, just take a fifteen minute stroll down Harvest Road, over the Stirling Highway, and you’ll see a hamburger place and a little bar, side-by-side.

We took this stroll past a series of smallish period homes and a couple of impressive mansions, finally introducing ourselves to what turned out to be the owner of the bar and the hamburger shop, a former Melburnian. I enjoyed a Beck’s beer, my wife a gin and tonic, in Mrs Brown’s bar as we waited for our hamburgers from Flipside.

Mrs Brown’s had a lovely local cachet, and, from all the pictorial evidence, I rather suspect Mrs Brown may have been Queen Victoria.

Into the bar from next door came the best tasting hamburgers I’ve had since the burgery on Nepean Highway at Brighton which used to be diagonally opposite Tommy Bent’s statue in Brighton in the 1960s!

It was worth another Beck’s, to enjoy the ambience of both nicely-run businesses.

As with anywhere else in Australia, building development and businesses activity in the West add to the nation’s character and wealth.  They don’t deserve to be damaged by such disastrous revenue and banking regimes. 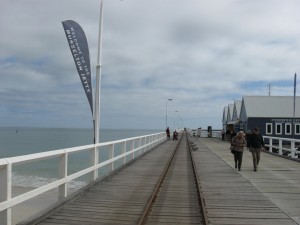