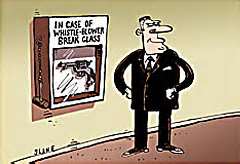 Like water seeking its own level, web-based movements such as Avaaz, Change, Getup, Occupy Wall Street, the Tea Party, or Wikileaks are flowing into obvious voids, challenging government and private misdeeds.

More often than not, they’re performing the sometimes controversial role of “tattle tale” or whistleblower.

Whilst they’ll be a burr under the saddle of some conservatives–undermining democracy in their estimation–I welcome their involvement in the democratic process.

I’d put the National Rifle Association in another category altogether: it may see guns as the ultimate defence against rampant government, but I’d much prefer to see the public discourse generated by the whistleblower groups as being much more fundamental to democracy.

As a member of the ultimate economic whistleblowing movement – Georgism – how could I possibly report on them unfavourably? They’re filling an essential role.

Unfortunately however, the economics that might provide a focus to all these organisations and put an end to the 0.1% stealing from the 99.9% continues to go unremarked.

Countries accordingly continue to descend deeper into the Great Recession.