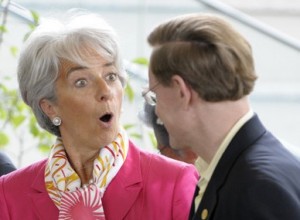 I looked for some hope to emerge from the weekend G20 talks in Washington.  There was none. No ray of hope at all.

IMF Chairperson Christine Lagarde and World Bank President Robert Zoellick and others spoke in platitudinous terms, trying to say all the right things, but saying nothing that’s going to assist effective demand and recovery.

They believe they will be able to avoid sovereign debt default by demanding austerity measures and financial rectitude, but how will cutting government spending create demand and put people back to work?

All failed to see the elephant in the room.  It’s not about credit and money, but about on what exactly money has been misspent.

Speculators, bankers and fund managers all need to be given a firm new direction which precludes the private capture of the public’s economic rent via land price bubbles.

The public’s land and natural resource rents needs to be captured for public revenue and the excess distributed as a dividend – equally to all citizens.

Banks who failed us should be let fail.  Taxes on labour and capital need to be abolished.

No one said that.

Worst of all, ‘the world greatest treasurer’, Wayne Swan, prevaricated when Barrie Cassidy questioned him this morning on The Insiders about the upcoming tax forum on 4 and 5 October.  There is now no doubt that the Australian treasurer, amongst other recommendations, wants to hose down former Treasury secretary Ken Henry’s ideas for restructuring state land taxes.

Swan is clearly falling into line with the very worst aspects of his G20 confreres.  Banks and political expediency, it seems, are more important than people and genuine tax reform.