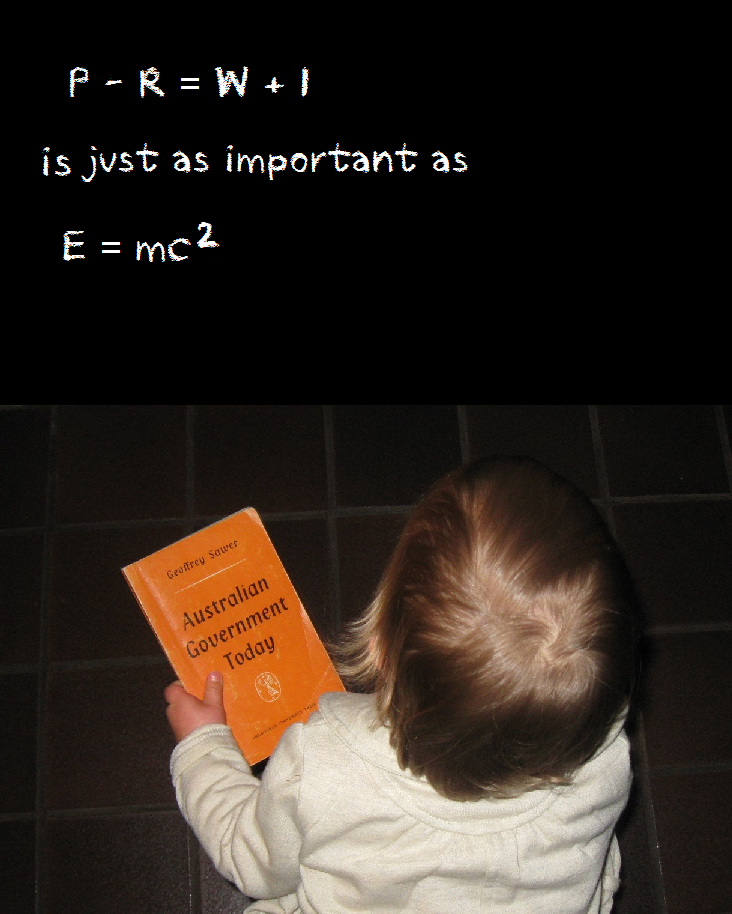 Could a 137 year-old equation explain the financial collapse?

While there are at least a hundred taxes, they all ultimately fall on returns to owners of three possible factors of production; land or other naturally endowed resources (R), labour (L) or produced capital (K). The earnings of each of these factors make up the income of individuals, and when added up over the whole resident population for a given time period (t), the income of the nation (Y):

This was a good starting point for how the three factors of production rate comparatively as revenue bases, but the case was curiously ambushed:-

This framework allows for an analysis of the relationship between the two main broad bases of income and consumption.

Income and consumption taxes may of course bear upon each factor of production, so we shouldn’t be diverted. Let’s stay with the equation, because it has an excellent pedigree. It is derived from another which, though more humble, makes the very same point, that production (P) is the sum of natural resource rents (R), wages (W) and the return to capital (I):  P = R + W + I

The transposition by Henry George of the distribution equation to P – R = W + I encapsulates his 1879 tour de force, “Progress and Poverty”, which became the world’s best-seller in economics.  An up-to-date characterisation of Progress and Poverty is that it is akin to Thomas Piketty’s “Capital in the Twenty-first Century”, except that it incorporates an equation actually explaining the mechanism which generates socially damaging wealth differentials, thereby admirably distinguishing George from Piketty.

If land, labour and capital, earn rent, wages and profits, respectively, is ‘land’ in its wider sense an active ‘factor’ of production? Surely not?  Aren’t natural resources the passive element in the production process, upon which the active factors, labour and capital, operate to generate wealth? Land/nature wasn’t created by anyone; it was just ‘there’.

Henry George went on to argue from this that the economic rent from land was therefore public property. Land rent was an unearned income, owed equally to all, and wages and capital profits, being earned, were genuinely ‘private property’ and ought not be taxed. Going back as far as Leviticus, many social philosophers before George had made the same point, but not as concisely as in his adjusted equation, P – R = W + I where he showed wages and profits are reduced by at least the extent to which we privatise economic rent and tax wages and profits. Indeed, capturing natural resource rents for public revenue might leave the rewards to labour and capital totally undiminished by taxation, and economic life greatly enhanced.

Leviticus and others notwithstanding, Jews and Christians, the world of finance, education and everybody else, have developed a smug and keen resistance to warnings that our natural resources should not be bought and sold as though they are commodities. These days, only First Peoples hold to such ‘outdated’ traditions, and indeed, a declining number of these. That land should be rented, not sold, must be wrong. We know better now. The proposition bores us and should be ignored.

By failing to acknowledge the economic reality of P – R = W + I, however, politicians are particularly unprepared to tackle the abolition of taxes, such as the 120 recommended by Australia’s ‘Henry Tax Review‘. Accordingly, populations have developed an increasing dislike for a misdirected politics and its perpetrators, because what may be economies of abundance have been reduced by rent-seeking (and its concomitant debt) to nations exhibiting increasing levels of social distress and want. Proper funding for housing, health, education and infrastructure is now beyond our reach – although they once seemed attainable when land-based revenues were the source which often built our railways, roads, dams and other infrastructure.

The political parties are aware of the need for fundamental tax reform, but they exaggerate the importance of the temporary side effects that will flow from effective action, mainly for the purpose of disparaging the other party: “Whaaat! You want to reduce peoples’ house prices!” That the mortgage-inflated profits of banks would be reduced, as is necessary, is also a matter of concern to some.

Treating the buying and selling of land at rapidly-escalating prices as ‘natural’ and merely a function of supply and demand has worldwide ramifications. Land prices, representing the private capitalisation of uncollected rent, have risen astronomically as a result of tax systems rewarding private rent-seeking at the expense of productive activity; the wage share of GDP has been in secular decline since 1975; business profits have declined or flat-lined (unless businesses are engaged in rent-seeking activity such as banking, real estate and insurance); manufacturing and profits have fled offshore to third world locations or to tax havens; and household debt has assumed such impossible levels that we live poor and die asset-rich.

Under these conditions, it is unsurprising that financial collapse has ensued across much of the globe, with economic depression now looming as a distinct possibility. Inaction on tax abatement gives little credibility to central bankers’ and politicians’ soothing stories about the economy transitioning to better days.

That’s what happens when world economies are run on a rent-seeking model where labour and capital have been taxed to a standstill. It may be of interest to note that the sub-title of Henry George’s Progress and Poverty was “An inquiry into the cause of industrial depressions and of the increase of wealth … The Remedy”. Economic ignorance on the role of natural resource rents has us mistaking the rentier regime under which we operate for capitalism, and a vast void in economics on the theory of real estate valuation and the study of economic rent—the latter occupying some 30% of the economy—forlornly awaits intrepid researchers.

George’s equation meanwhile continues to mock those policy makers, economists and politicians unable to understand what’s happening in the world of finance. Quantative easing, negative interest rates and austerity measures have all proven ineffective in repairing the current crisis. As we marvel about how the 0.1% can possibly continue to widen the wealth gap at our expense whilst world economies crumble about us, it may be the equation P – R = W + I provides the answer.