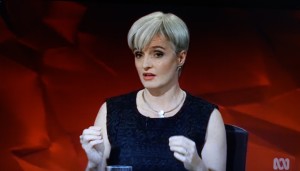 A most enjoyable Q&A on science last night.

At the end of the program I was nonetheless left feeling quite discomforted by a void, obvious at least to me.  Why does science always look sideways at this one truth?  In misguided deference to whom?

There was nothing at all mentioned about the theory of land valuation which demonstrates the vast benefits that would flow from a true applied economics, certainly not from a current economics which excludes the study of land rent – at least one-third of the economy!  An applied economics that, exposing the privilege flowing mainly to the 0.1% from unearned incomes would capture these to the public purse, and free earned incomes from all arbitrary forms of taxation: I believe we understand that taxation and its deadweight is counter-productive; that it destroys (especially the natural environment)? An economics that works for people and society, instead of for privileged interests. An economics that, by putting banking and real estate into proper context, would obviate the many symptoms and corruptions created by impossible levels of debt.

Just as last night’s Q&A dispelled the belief that women can’t succeed in the sciences, so would the rediscovery of a scientific economics which includes land open up new worlds.