When you know how economies work, it’s frustrating to hear on Neil Mitchell’s radio show on 3AW this morning doctors and teachers complaining about underpayment for the work they do . Read the newspapers, watch TV, or go online often enough and you’ll learn every occupation is underpaid! 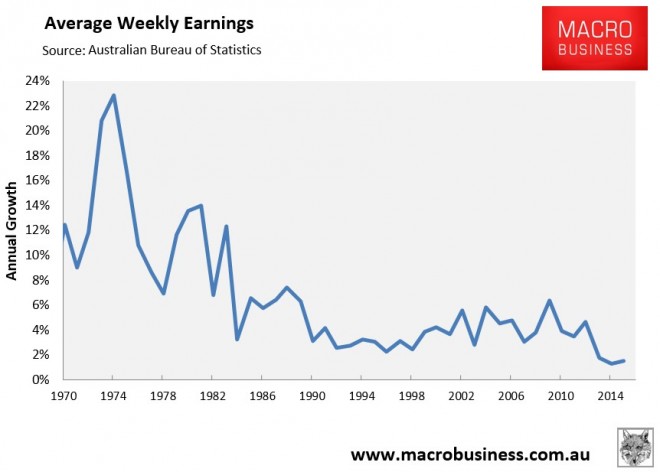 In fact, the growth of Australian average weekly earnings has declined in the second half of the Kondratieff Wave, ever since the 1970s. Incredibly, some employer groups applaud this trend whilst businesses struggle to make a profit, not appearing to realise that business will perform better if people have dollars in their pockets to spend. There’s the supposition based on a false dichotomy: wages versus profits – and mainstream media laps it up because it doesn’t understand how the economy works. “False dichotomy”? Read on.

It’s not just the decline in growth of average wages that accounts for the poor performance of the Australian economy, or for that matter, of world economies. US Bureau of Labor Statistics data show real average wages have actually gone backwards since 1972! 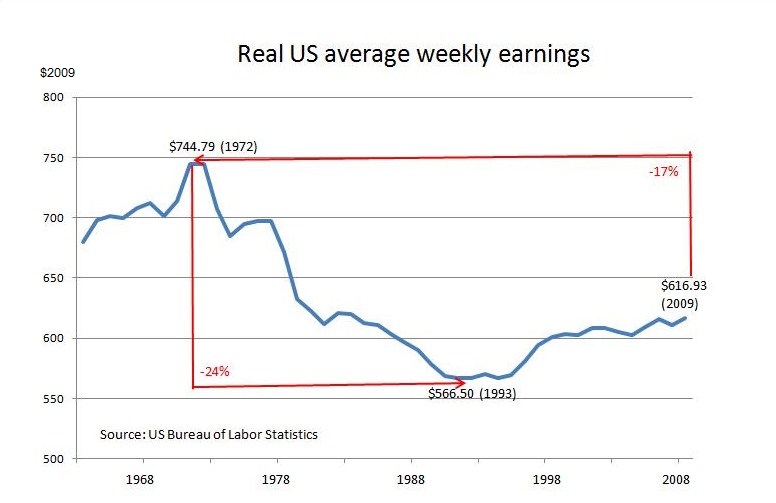 Many wonder how this is possible in a world of incredible innovation and apparent prosperity, but it is explained by impossibly high levels of private debt, and the diversion of wages and profits into rent-seeking.

Some people note that the beginning of the decline in wages commenced with Richard Nixon ‘temporarily’ taking the USA off the gold standard, but although this had an effect at the margin, we have to dig deeper, that is, before we consider money, debt and taxation..

Production (P) is naturally distributed to wages (W), earned profits (I) and unearned economic rents (R), the latter mainly as land rent as society progresses.  So, P = W + I + R.

But if we capture unearned economic rent for revenue as we did once, we don’t have to tax wages and profits:   P – R = W + I

But we have increasingly permitted more and more of our economic rent (R) to be privatised, particularly since the outset of the 1970s. This has meant that wages and earned profits have necessarily been taxed more. Not only this, but the private capture of publicly-generated economic rent also creates higher and higher land prices as it becomes capitalised.

So people are confronted with higher and higher land prices and taxes, as rent-seekers–particularly the 0.1%–steal our wages and profits, generating obscene wealth differentials.

So it’s no wonder professions are complaining about inadequate income, and youngsters can’t get a home because of impossible land prices, whilst many households carry massive debtloads – and economies continue to collapse. Land prices and taxes on labour and capital have gutted world economies.

We need to capture economic rent.