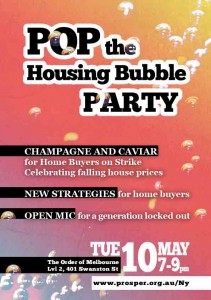 I missed Wayne Swan delivering his federal budget on TV last night because I was out at a party in the city celebrating with champagne and caviar the popping of Australia’s real estate bubble.

Karl Fitzgerald and David Collyer spoke entertainingly, and David proposed the toast to the pricking of the bubble.

There’s now some hope for younger Australians’ access to a home, regardless of what the treasurer serves us up tonight, I thought.

When I got back home, I did a bit of late night channel-surfing to learn what had happened in the budget. There was some good news about mental health.

Also, looming large as life was genial shadow treasurer Joe Hocking smirking that Wayne Swan would never deliver a budgetary surplus. He’s right. He probably knows the disastrous implications of the residential market now starting to revert to its long term trend, although he’s obviously quite unprepared to mention this rampaging elephant within Treasury’s budgetary rooms.

And there was Paul Bloxham being asked what might curtail Wayne Swan’s heroic aim of bringing in a surplus budget by 2013.  As he considers Australia doesn’t have a real estate bubble, he had to hesitate for a moment.  Something would happen to show up Swan’s “rubbery figures” on our burgeoning resource sales with China, Bloxham opined.

I went to bed chewing over the vast discrepancy between our small group celebrating the collapse of the property bubble and the millions of words in which the media will analyse the budget without making this necessary connection.

I know which group has a firmer grip on reality.

One thought on “DELUSIONS”