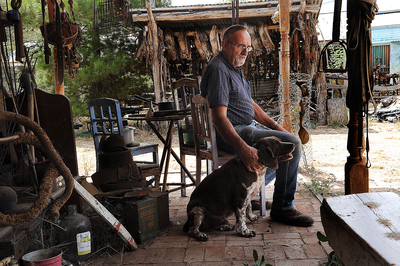 Danny Johnson, Warracknabeal, at his Rusty Nail Restaurant with dog

I’ve mentioned the Danny Johnson phenomenon, wherein he brought a crowd of protestors to the streets of Melbourne in 1991.

Seems 21 years on Danny Johnson and his followers still haven’t got to the bottom of government failure.

Hard economic times aren’t caused by governments, Danny; they’re caused by us.  We permit land price bubbles to generate, and then they burst – and it’s happened again. Then, we will kick the government of the day out on its arse – but WE are responsible.

The Land Values Research Group (LVRG) was able to forecast both the 1991 recession and this current economic depression.  This predictability shows the LVRG has a scientific explanation for hard times.

We still need to cut taxes on doers, Danny, and to capture more of the economic rent of our land, as recommended by the Henry Review.