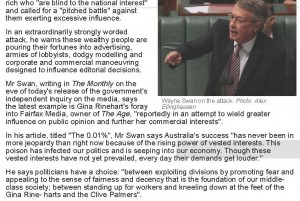 The Labor Party and Treasurer Wayne Swan are no favourites of mine.  However, I have to agree with Wayne Swan’s attack on those Australia’s miners who don’t want to pay their fair share.

The miners clearly don’t accept they have a partnership with the Australian people, and that an understanding of economic rent shows we are entitled (yes, entitled!) to 50% of their after-tax profits; that’s what economic rent is.

But no, it’s all theirs because they create employment.  [Cringe!]

Predictably, the shock jocks–ever proponents for the 0.1%–don’t accept Australians claim to the economic rent of their natural resources either. They’re out there defending the miners against Wayne Swan.

“This is class warfare” exclaimed Neil Mitchell on 3AW this morning. This claim is very interesting because it’s also what the 0.1% has been saying about higher taxes proposed for the wealthy in the USA. Coincidental?  I doubt it.  The 0.1% is nothing if not slogan-prepared.

So, higher taxation of the poor and middle class which has seen the real incomes of labour and capital decline is OK; it’s NOT class warfare, guys?  C’mon!

One irate listener angrily rang in to claim Neil Mitchell and 3AW are “rich Liberal sycophants”.

I suppose you’d expect Bill Shorten, Minister for Employment and Workplace Relations (and for Financial Services and Superannuation) to have defended Wayne Swan’s attack as he did on Mitchell’s program, and Shadow Treasurer Joe Hockey to fall in with the miners.  But I trust Hockey’s contribution was a matter political expediency rather than the Liberal Party taking permanent sides with the 0.1% – because it is the latter who have undeniably created this world financial collapse with their extraordinary capture of land and natural resource rents at the people’s expense.