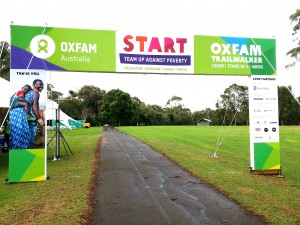 Oxfam’s 100 km walk is on once again this year over the weekend 19 to 21 April. It commences at Jells Park Glen Waverley and finishes at Wesburn after traversing through some beautiful countryside to Melbourne’s east. There’ll be 700 teams taking part: amazing!

As with institutions such as World Vision and St Vincent de Paul, Oxfam works to fight poverty and dispossession, a most worthy aim.

It’s ultimately disappointing, however, that these bodies–espying that poverty is man-made–still won’t contemplate signing up to a revenue system that will put an end to the 1% ripping off and dispossessing the poor.

To them Georgism remains akin to the mad uncle who must be kept up in the attic and never mentioned.

Donating money to projects to alleviate poverty can be palliative but can never replace the economic justice promised by land-based revenues.

I’m reminded of a withering letter the soap manufacturing magnate, Joseph Fels, sent in reply to a begging letter from the dean of a theological institution.

Fels’ response is sharp but not cruel because it covers the issue so factually. See what you think.

2 thoughts on “CHARITY, OR JUSTICE?”