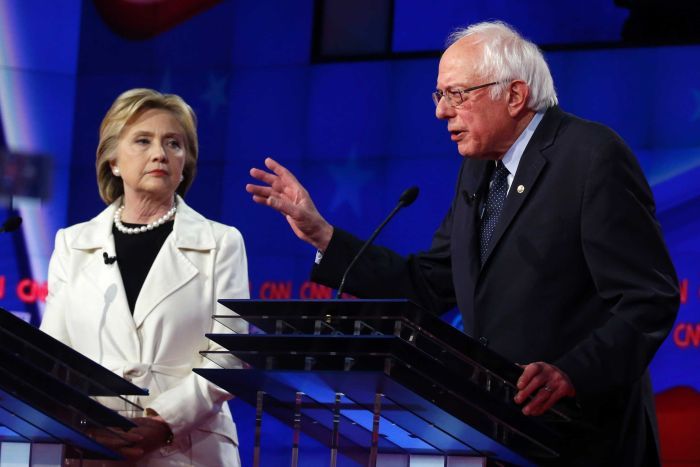 The Bernie Sanders-Hillary Clinton contest in the debates for Democratic Party presidential nominee is paring back to whether Main Street should challenge the Big End of Town. Sanders has questioned Clinton’s judgment at least, in accepting $225,000 to speak approvingly to Goldman Sachs’ directors. Her responses to Sanders on the question have been unconvincing.

Behind Sanders’ charge is the belief that it’s extremely difficult to call Wall Street to order once you’ve accepted money from America’s poster-boy investment banking firm. No, it’s not bribery: it’s just a sign that Hillary mustn’t be overly-concerned about the unreformed excesses and criminality as depicted in the movie “The Big Short“.

The People versus Banksters is also playing out between Australia’s major parties, the Liberal Party opposing Labor’s proposal that if it is elected to office it will call a Royal Commission into banking because of exposed malfeasance.

It’s therefore unsurprising that the Australian Bankers’ Association has also rejected the call for a Royal Commission. It has promised bully-boy tactics of a costly mining industry-type advertising campaign, which suggests it “doth protest too much” if it has nothing to fear from an inquiry.

That ASIC and APRA already have the necessary powers to remediate banking issues, as claimed by both the ABA and Liberal Party, becomes risible once it’s understood that whistleblowers not ASIC nor APRA have been responsible for exposing banking sins to date.

If a Royal Commission does get off the ground in Australia, or if the US is to really remedy Wall Street’s corruptions, we should certainly first consider the basic corruption, rent-seeking per se, before we get into finger-pointing at the banking personalities defending it.

It’s the fundamental principle of banks rent-seeking in a public asset that’s in question here.

ps.  Now we have the National Bank of Australia sponsoring a Liberal Party fund-raising event. How strange!  (Not!)