Whether in the Arab Spring or the Occupy movement in the West, despots and governments are being challenged more and more by younger people and others imbued with a sense of fairness and economic justice.

They’re sick of being mercilessly ripped off by the system itself. It stinks. And printing more money is the answer to nothing. It merely delays financial collapse until governments’ last vestige of credibility has evaporated.

I see Egyptians are getting windy that the revolution against the Hosni Mubarek regime might have merely replaced him with the military. They want civilian government.

There’s no certainty, however, that any civilian government would capture the economic rents from Egypt’s well diversified economy. Why won’t yields on natural resources continue to be expropriated by a privileged few, thereby continuing to impoverish Egyptians? After all, as in the west, they’ve not been educated to the massive quantum of natural resource rents within the economy—in fact, text books claim it’s a miniscule amount—so they don’t understand public capture is critical for successful societal change.

Just as a change of government in western society doesn’t necessarily address the one per cent’s privatisation of most of a nation’s natural resource rents, Arab Spring revolutions lacking a program to capture for the public what is the public’s are likely to be revolutions in name only, and likely to be ineffective.

The genesis for overthrowing dictators in the Middle East has largely seen better-schooled Arabs completing their educations only to find there’s no employment for them: they’ve been locked out of job opportunities.

There’s something terribly wrong with any system of government where people willing to work are unable to get employment, even to work productively for themselves.

The ability to work should be as natural as the ability to breathe. Nobody intervenes to stop people from breathing, but people do preclude others from access to natural resources – although such access is a precondition for work. Rent-seekers monopolise and commodify natural resources, and if you can’t buy in at their price, then you’re simply left out.

We can only trust those working for societal change confront the almost invisibly small but powerful group of rentier kleptocrats found behind every dictator, behind every corrupt government.

These are the parasites feeding off the people’s economic rent and denying them a living. These are the people pulling the strings of government, influencing them to call in university police with the pepper spray.

As always, their aspiration is to maintain control of peoples’ lives through their private capture of the public’s resource rents. 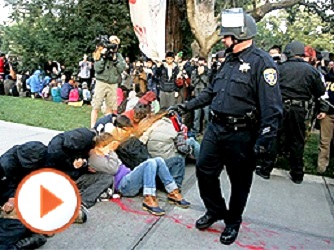