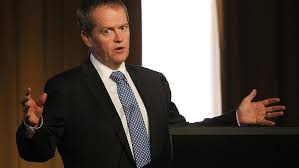 There’s no doubt Opposition Leader Bill Shorten’s equating the meanness of Tuesday night’s budget to something that might have been expected from America’s Tea Party will strike a powerful chord with most Australians.

For the first time, Shorten’s soaring speech showed him to have the mettle necessary as a political leader’s stock-in-trade. He listed and laid bare the simple-minded ideology behind the nastiness that took from those who could ill afford to have their positions further reduced whilst leaving those earning more than $180,000 having to deal with a small levy on their incomes.

This is indeed the part of the budget that does need to be reviewed, and Bill Shorten could not have zeroed in on it nor expressed it better.

However, as the budget’s list of assistance to states for their infrastructure funding was quite impressive, Shorten made no allusion to it, but he did attack the federal Liberal Party’s $80 billion short-sheeting of state finances for health and education.

Are you going to be up to it? Have you the leadership to resist the accumulating pressures to leave the miners and big capital gains-seekers—the 1%—alone, whilst increasing the regressive GST as “the only alternative”?