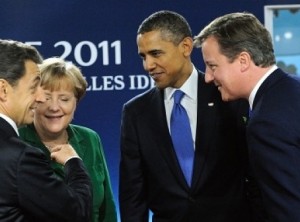 If you follow what is known as the “Great Recession” in the US [the “Global Financial Crisis” (GFC) in Australia] in the financial pages, you’ll be aware of the acres (hectares?) of newsprint devoted to international levels of public and household debt, and meeting after meeting of the highly-placed officials who try in vain to resolve it.

It has become a circus.

You seem vaguely to recall that Ancient Rome also went through these preliminaries of ‘bread and circuses’ as a prelude to its destruction.  Decaying societies don’t seem to have the wit to address solutions.  They prevaricate.

As some people try to deal with their debt, or drown their sorrows by means of these daily entertainments, their highly-placed representatives rub shoulders, wallowing in the hubris of self-importance for a photo opportunity.

It sells more newspapers, more ads on TV, to present this infinite amount of evidence of intertwined financial, economic and social disorder, and to offer the public such diversions.  Solutions certainly will not sell like this!

Who knows Ireland is to implement a site value tax in 2012?

Or, that Greece is introducing a property tax immediately?

Or that there are people in all parties in Britain who believe a land tax should be considered?

REAL solutions actually embarrass politicians because they remove the tax privileges of the 1% — and you don’t want to offend powerful interests!

When national leaders are able see the need to ….

… you’ll know the days of bread and circuses are numbered.  Not before.