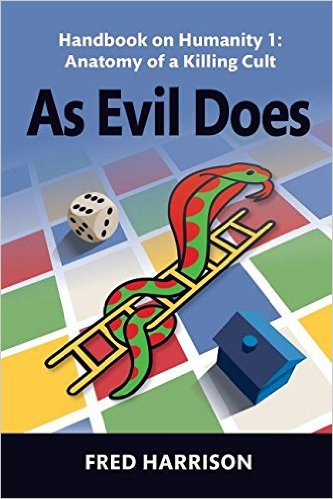 AS EVIL DOES Handbook on Humanity 1: Anatomy of a Killing Cult

With this latest project, Fred Harrison raises the warning of impending disaster to a level that will hopefully find a wide and responsive audience. Those familiar with Fred’s prior work will find this book familiar in tone and territory. For others, the book is wake-up call for desperately-needed action.

In this first of three anticipated volumes, Harrison explains to his fellow citizens across Britain how their rights to a decent human existence were taken from them by the force of law beginning with Magna Carta. He presents evidence that the very design of the House of Commons was the instrument of privilege and despotism. He writes:

“That house served a culture which abused the people of the commons of England, and then of the British Isles, for centuries. The ethos was fashioned by a small minority (the feudal nobility) to privilege their class.” [p.2]

The story is one of struggle that included failed heroics by leaders such as Winston Churchill and Lloyd George and reformers such as Henry George. Along the way came the silence of men such as George Warde Norman, head of the Bank of England, who saw the path to the just society but chose to do nothing. Worse still was self-serving intellectual dishonesty exhibited by philosopher Herbert Spencer, economists and other intellectuals. As Harrison says of Spencer:

“In the annals of scientific thought, there are few betrayals to compare with Herbert Spencer’s heinous rejection of his own work.”[p.25]

And, in the current era, objective truth has been silenced by the established holders of power. One example is how a study of taxation prepared by Nicholas Stern of the London School of Economics was buried from public scrutiny. To his credit, Professor Stern went public, calling for the taxation of land values as a necessary change in public policy.

The fact that this book had to be written at all is a clear indication of the hold on cultural norms by those who have long enjoyed monopolistic and destructive privileges as a rentier class. Harrison patiently details how landed privilege has doomed civilization to an inglorious decline by destruction of our physical and cultural commons. For the people of Britain, the process accelerated whenever Conservatives regained power. The repeated failures of state-socialism to meet the needs of people served as a defining selling point for a weary, general public. Landlordism, presented as free market capitalism, was unleashed from any mitigating social policy restraints.

Expanding on the underlying story of how landlordism and rent-seeking created a world of haves and have nots, Harrison describes the role of the financiers. Peasants who had for centuries contributed a portion of their crop into the public storehouses were by the 16th century required to sell their crops and pay cash rents and taxes. All the risks were transferred to the peasants. When their crop failed or prices fell, they were removed from the land. The bankers stepped forward to provide the cash and credit to fuel every cycle of boom-and-bust that followed.  Harrison points to this as yet another lost opportunity for George Warde Norman to share his knowledge, exercise his authority, and change the course of history:

“Norman had diligently studied the theory of rent, so he was competent to explain to his fellow Directors at the Bank [of England] that the booms were driven by rent-seeking.” [p.37]

The same could not be said for Gordon Brown, even though Harrison had warned him in 1997 that troubles were on the horizon. Because, I think, Harrison is not a member of the club of approved policy analysts, his warning was ignored. The financial system crashed and the establishment declared none of it could have been foreseen. By messaging and repetition, “the rent-seeking culture wraps layers of fiction around people’s minds.”[p.40] Despite public outcries, few executives were fired or even demoted let alone indicted for criminal behavior. The evidence presented confirms his observation that a “culture of cheating” has taken hold of the modern world. Britain is a case of a society unraveling under the pressure of intensified “rent-seeking.”

Providing the detailed evidence arms British readers with an insightful description of the nation’s domestic history few have likely encountered elsewhere. “The outcome of this history,” writes Harrison, “was a weakened sovereign state. This was the direct result of power over the public value being transferred to landowners and their financiers.”[p.62] Democracy is, without substantive civic engagement, an illusion.

Later in the book, Harrison examines the fate of the people of Scotland. Would sovereignty and a break from the United Kingdom secure a brighter future? His answer is no:

“Sovereignty would have locked the Scots out of their share of a deep pool of riches – the pots of gold which they help to create. The looters in their midst would have breathed a sigh of relief … and the looting of Scotland would have continued unabated.”[p.107]

While Ireland is and has been sovereign for nearly a century, its history and contemporary experience provide yet another lesson in how laws that reward and encourage rent-seeking bring on disaster. Even in the face of economic and financial collapse, privilege survived:

“There was a brief interlude when Ireland was astonished at the spectacle of principled politicians in their midst. The Green Part attempted to inject new thinking into policy. It advocated tax reform – in favour of treating rent as the public’s revenue. They all lost their seats in the February 2011 election. Politically speaking, it was downhill all the way for Ireland. The culture of cheating had triumphed.”[p.76]

At home, in Britain, the same dynamics affect not merely the quality of life but life expectancy, bringing Harrison to declare Britain to be dominated by a “killing cult.” Faced with the very real problem of millions of people unable to support themselves or their families, “the intellectual and political elites … seek comfort in scapegoats.” And, as he concludes, the supposed experts on public policy are heavily invested in ideas that do not work:

“The doctrine that convergence of life’s opportunities is at the heart of the democratic process is a cruel deception. It is kept alive to con the vanquished into settling for crumbs, and the world of scholasticism is not about to change that prospect.”[p.99]

This includes most economists.

In this book, as in every book, article, documentary film and interview, Fred Harrison challenges us to think more deeply about the state of the world in which we live and how we came to live as we do. A person of lesser conviction and concern for his fellow beings might have given in to cynicism and despair years ago. Not only is it critical that this book be widely read and discussed, but that the thoughtful among us unite to demand an end to the existing rules of engagement. As Harrison puts it to us:

“Abolishing the culture of cheating, which is now the most important challenge facing our species, is a personally disturbing prospect. The obligation on each of us to pay for what we consume represents transformation on a revolutionary scale; and that arouses anxiety. And yet, the pricing mechanism which would deliver that transformation is so self-evidently correct that it arouses confusion. It is contrary to what we have been schooled into believing.”[p.134]