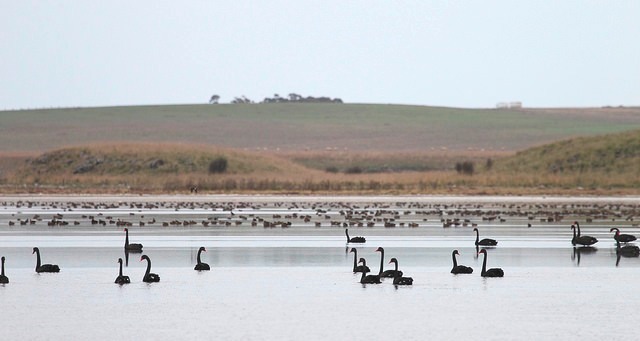 ‘Black swan events‘ are said to be major unexpected socio-political happenings that come out of the blue – like a black swan.  A black swan?  Very rare (in some parts!)

Revolutions are sometimes put into this category, even though they are entirely explicable in terms of the wealth divide between the super-rich and everyone else having achieved intolerable proportions – a bit like we seem to be attaining right at the moment. Revolutions, usually caused by matters of taxation, are certainly never black swan events.

But, more importantly, nor is The Great Recession (US), now known in Australia as the Global Financial Crisis (GFC), a black swan event, although many neo-classical economists would like to paint it that way in order to excuse themselves from their complicity (sometimes ignorance?) in banks around the world having been permitted to fund land price bubbles and get away with it.

It’s interesting that Australians are not only used to black swans—where they are native and found in great numbers (the equivalent Australian term might, in fact, be ‘a white swan event)’—but Australians such as myself and Steve Keen were amongst those in the forefront in calling this ‘black swan’, this GFC, years before we spoke about it (in “Lifting the Lid on the GFC“) at the Melbourne Town Hall in 2009, along with Michael Hudson.

Sure, Steve Keen has been criticised for getting his timing ‘wrong’ for the collapse of Australia’s real estate bubble–who could have foreseen the massive public expenditure the Rudd government would use to keep it happening?–but that is not to deny that Steve foresaw and spoke about upcoming inevitably bad outcomes from extant credit bubbles.

I looked at the impending collapse rather from the point of what all this credit had been permitted to fund.

So, let’s not hear analysts use the “black swan” metaphor for the current economic crisis. Like almost every recession or depression, it followed hot on the heels of yet another unsustainable bubble in land prices.

Aussies, quite used to black swans, forewarned the world we were running government-sanctioned Ponzi schemes.  We still are in Australia, and it must end badly for us, too.