In the excellent 3-part ABC-TV documentary “Making Australia Great: Inside Our Longest Boom“, journalist George Megalogenis traces the politico-economic events that set Australia up for its longest period without an economic recession.

Megalogenis shows the October 1987 share market crash didn’t  generate an economic collapse. As always, it took the bursting of a real estate bubble in 1988-89 to bring on the 1990-91 recession – Australia’s last.

The documentary tells the tale of our ‘asset bubbles’, which I see as land price bubbles – affecting both our real estate and share markets.

We are very good indeed at surgically exposing our economic history post hoc in such documentaries, but less practised at decent live commentary saying “Look – it’s happening again!“, as it has in Oz since 1996. Yes, that’s correct, we’ve inflated this particular land price bubble for 22 years!

So, to George’s two questions: “How did we become the last rich nation standing, and can we make something of our moment”, may I suggest in response: (a) the Rudd-Swan government spent more than $50 billion in 2008-09 to keep our bubble inflated, and (b) yes, we have made something of the moment by developing the most gargantuan real estate bubble in history.

It’s about to burst around our ears. 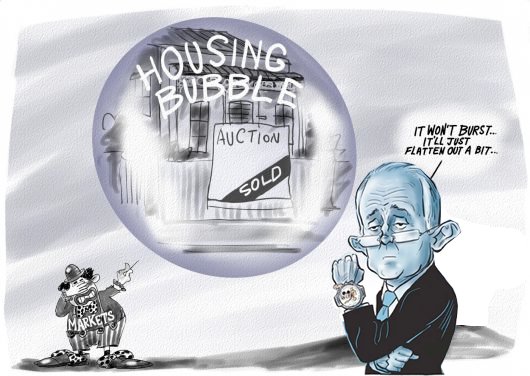