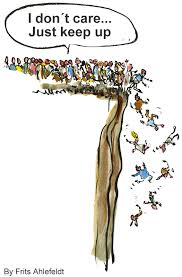 So we are led to believe Prime Minister Tony Abbott’s future depends upon his speech today at the National Press Club in Canberra?

It’s not looking good, because the man is against any form of mining ‘tax’ (rent), or charges on pollution, for heavens sake!  Will he renounce those idiotic positions, too, along with his paid parental leave scheme?

No, his speech will be full of the trivia that often appeals to the press. He will studiously avoid the capture of economic rents instead of all the taxes on productivity that have brought the nation to its knees.

But then Opposition leader Bill Shorten is not within a bull’s roar of addressing the critical issue of tax abolition either.

Political leadership is absent in this country.  Where are the men and women of Australia’s Progressive Era?