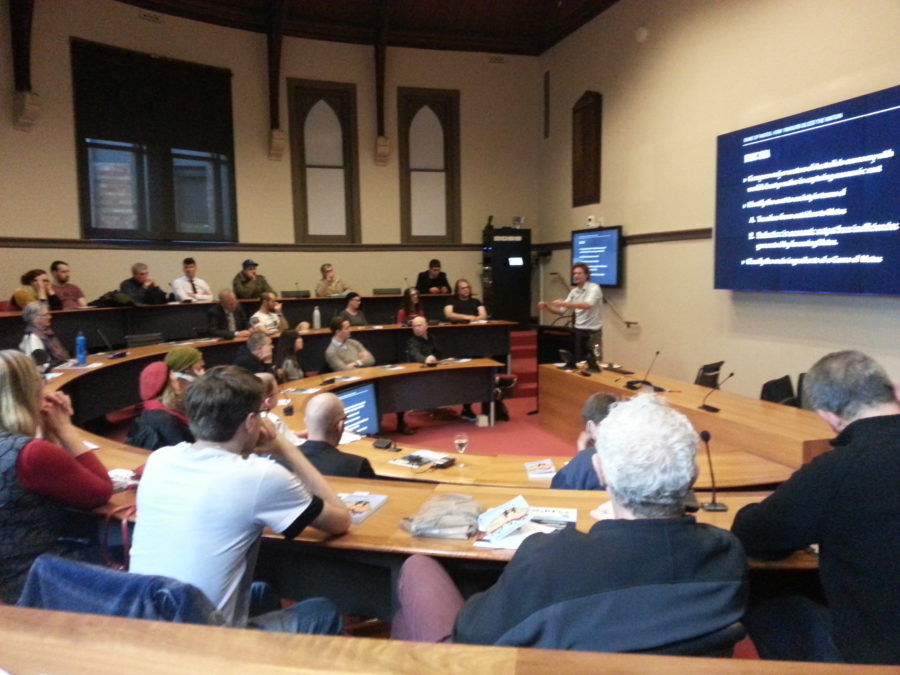 “The more tuned out the general population, the more James can get away with his Game before voters notice.”

A full house attended the official Melbourne book launch by co-author Dr Cameron Murray of the “Game of Mates: How Favours Bleed the Nation” at RMIT’s Francis Ormond Building on Friday.

I’ll let people read this excellent book to see precisely how we’re being ripped off by “grey gifts” which authors Murray and Paul Frijters explain are unearned economic rents. But if ‘economic rent’ is a term unknown to the average Australian (or “Bruce” in the book), maybe Bruce will respond better to the term “grey gifts” which are being exchanged between Australia’s rip-off merchants (called “James”) at an incredible cost to Australia.

Both on reading “Mates” and seeing Cameron Murray’s surgical presentation on Friday, I was struck by why our politics and media have fractured over matters such as the Brexit and Donald Trump phenomena: people sense they are being taken as fools, but don’t quite understand the mechanism that’s robbing them.

Many thanks to RMIT and Prosper Australia for organising the event.

Forget climate change and population increase for a moment, deal with these grey gifts, folks, and you’ll find there’s a vast fund available to address these and all of Australia’s current issues, including housing, education, health, infrastructure and social welfare.

By failing to tap grey gifts (which I’ve assessed amounts to one-third of the economy), our political system has directed itself into supporting productivity-destroying tax regimes that cost $2.34 for every dollar raised.

A report in THE AGE today exposes the latest grey gift rip-off – in our gas exports. There are even accounts of people re-importing the exported gas to sell in Oz, and still make a good profit!    🙁

One thought on “Australia: You’re being ripped off mercilessly!”