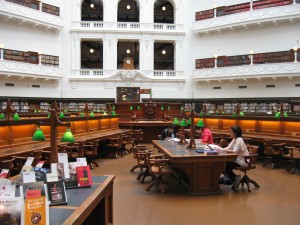 I toddled along at 6:00 pm tonight to the Grattan Institute meeting at the State Library of Victoria.

George Megalogenis from THE AUSTRALIAN did a pretty good job questioning Grattan’s CEO John Daley about the Institute’s new report, Game-changers: Economic reform Priorities for Australia, and Daley covered a multiplicity of topics in the hour allocated for his response.

Megalogenis opened with surprise that industrial relations rated so lowly on Daley’s priorities. They then proceeded up a list of  items to which the report gave greater weight.

These included increasing workforce participation of women and older people, so Australia may grow its GDP.

I was a little disappointed when John Daley suggested we needn’t be best at anything in particular, as long as we sought to adopt world best practice in many areas.

But we do already lead the world in having assessed an accurate land value on each property in Australia, John.  ABS Catalogue 5204(061) shows this accumulates to $3.785 trillion, the figure representing the private capitalisation of our surface land rents.  Our best economic minds should be investigating the potential of this land rent to replace damaging taxation, in order to increase our productivity by removing the leadening impost of taxation’s deadweight, particularly that of the the GST.

In looking at workable tax reform, the Grattan Institute’s priority was removal of the GST exemptions for health education and fresh food which accounts for some 40% of spending. There’s little doubt in my mind that had Ken Henry’s “Australia’s Future Tax System” been allowed to canvass the GST, it would have actually moved the opposite way, to roll it back.

Grattan’s secondary but substantial game-changing recommendation, that the states abolish stamp duties and replace them with a reformed land tax (as also suggested by The Henry Tax Review), didn’t rate a mention in the dialogue.

So, I began to frame a question in my mind.

My hand went up, but only three or four questions were taken before time ran out on us.

The beauty of a blog is that I can get my question out here:

“George, perhaps industrial relations didn’t loom large on John’s radar because the fight between labour and capital is largely a manufactured one , distracting us all from the influence of the almost invisible third party of which to some extent many of us are members, namely the rent-seeking class, who steal vast sums from both labour and capital?

Had the Institute’s recommendation for greater land rent capture via the state governments been in place already, is it not arguable that there would be less rent available to be capitalised into the massive land price component in their mortgages to which many people in tonight’s audience have been shackled?”

I’m sure the question would have struck a chord with many of the mortgage tyros in tonight’s audience of 250 to 300.  Australian household debt is preposterous.

Even though it sees a place for state land tax reform, Grattan’s half-heartedness on the point shows it hasn’t discovered the enormous quantum of publicly-generated land rent within the economy.