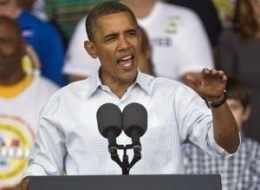 OBAMA’S THATCHERITE GIFT TO THE BANKS: A $50 BILLION “INFRASTRUCTURE PLAN”

I can smell the newest giveaway looming a mile off. The Wall Street bailout, health-insurance giveaway and support of real estate prices rather than mortgage-debt write-downs were bad enough, not to mention the Oil War’s Afghan extension. But now comes a topper: the $50 billion transportation infrastructure plan that  Obama proposed in Milwaukee – cynically enough, on Labor Day. It looks like the Thatcherite Public-Private Partnership, Britain’s notorious giveaway to the City of London underwriters. The financial giveaway had the effect of increasing prices for basic infrastructure services by building in heavy financial fees – guaranteed for the banks, who lent the money that banks and property owners used to pay in taxes in more progressive times.

The Obama transport plan is like a Fannie Mae for bankers, based on the President’s guiding mantra: “Let’s help Wall Street put Americans back to work.” The theory is that giving public guarantees and bailouts will enable financial managers to use some of the money to fund some projects that employ people – with newly created, non-unionized companies, presumably.

Here’s the problem. Transportation projects will make real estate speculators, the construction industry and their bankers very rich unless the government recovers its public spending through windfall site-value gains on property along the right-of-way.

What’s the point of a party having a constituency, after all, if not to sell it out? Is not the Democratic Party’s role to deliver labor, the minorities and the large cities hog-tied to Wall Street?

Hollywood surely has made enough movies along these faux-populist lines. The banker of a Western town manages to grab property along the railroad tracks coming through, to make a killing. The local mobster pays off a state legislator to build a highway by his property, making his land much more valuable. Mortgages will be refinanced in much larger sums. At least, this seems to be President Obama’s hope as he positions himself to become America’s Tony Blair. The role of Britain’s New Labor, after all, was to ram through economic programs so far to the right than no Conservative government could get away with them. In the United States it falls to Obama’s New Democrats to shepherd through proposals that Democrats would vote down if the Bush-Cheney Republicans had tried to enact them.

What President Obama did not acknowledge is a basic principle that every transportation economist is taught: Transport investment normally can pay for itself, simply by a windfall-gains tax enabling cities or other jurisdictions to recapture the higher rent-of-location and site value along the right-of-way.

London’s extension of the Jubilee Tube Line to the city’s financial district in Canary Wharf recently demonstrated this principle. The line’s extension cost £3.5 billion but increased property values by an estimated £13 billion along the route. A political protest movement arose over London’s failure to finance its transport system by taxing the higher rent-of-location and site values it created. Failure to do so gave landlords a windfall – one that the city could have recaptured by a windfall tax to cover the cost of what it spent. For instance, it could have issued bonds secured by a windfall property-rent tax.

Paying for capital investment out of such tax levies could provide transportation at a subsidized price, minimizing the cost getting to and from work. That would have made its labor force more competitive by alleviating cost-of-living pressure on wages, freeing more income for spending on goods and services and thus helping the economy.

But Obama’s infrastructure plan is for Wall Street investors to get the windfall – as property owners or as mortgage lenders making much larger loans against the enhanced site value. Balzac said that behind every family fortune is a great theft, and I would add that behind every great fortune is a public-sector giveaway. The largest asset in most families, billionaires as well as small homeowners, is land. The key to its site value (“location, location and location”) is transportation and other public infrastructure. The land grants to railroad barons after America’s Civil War, for example created the largest American fortunes for the ensuing century.

Obama’s guiding principle since taking office is that of his Republican predecessors: It’s Wall Street that makes America rich. In this mythology it’s the wealthiest brackets that employ labor, not downsize and outsource it. So it’s the rich who deserve tax breaks.

No wonder Americans are listening to populist rants against “big government.” The Wall Street bailout was the watershed in making our government look like those of Britain and France in medieval times, with their special interests, insider dealings and giveaways to court favorites. Governments were hated when they were controlled by landed aristocracies and foreign bankers funding each new war debt by an excise tax borne by the population at large, not by the wealthy.

America got rich from the Progressive Era onward by a different kind of big government than we have today. From the Cumberland Road and Erie Canal onward, it provided roads and other basic services at public expense for free or at subsidized prices. The guiding idea was that the “return” to public investment should be measured by the degree to which it lowers the economy’s costs of living and doing business, not in the amount of income it could extract.

The plan would not add to the government deficit,  Obama promised. Unfortunately, in place of government taking more revenue, it will be the finance, insurance and real estate (FIRE) sector that does the taking. The banking system will now do what government was supposed to do back in the Progressive Era: finance infrastructure. The difference today is that instead of funding transportation out of tax proceeds (levied progressively on the wealthy) or by the central bank monetizing public debt, the Obama plan calls for borrowing $50 billion at interest from banks.

The problem is that this will build in high interest charges, high private management charges, underwriting fees – and government guarantees. User fees will need to cover these financial and other privatization costs “freed” from the government budget. This will build about $2 billion a year into the cost of providing the transport services.

This threatens to be the kind of tollbooth program that the World Bank and IMF have been foisting on hapless Third World populations for the past half-century. The “infrastructure bank,” reports The New York Times, “would be run by the government but would pool tax dollars with private investment.” It would be a test balloon for financing “a broader range of projects, including water and clean-energy projects,” for which Democrats already are drawing up a blueprint:

“[Connecticut Democrat Rosa] DeLauro’s plan would create an infrastructure bank that would be part of the United States Treasury, where it would attract money from institutional investors, then channel the funds to projects selected by a panel. The program, which would make loans much like the World Bank, would finance projects with the potential to transform whole regions, or even the national economy, the way the interstate highway system and the first transcontinental railway once did.

“The outside investors would expect a competitive return on their money, so many of the completed projects would have to charge fees, taxes or tolls. In an interview, Ms. DeLauro said she would be “looking at a broader base,” meaning the bank would finance not just roads and rails, but also telecommunications, water, drainage, green energy and other large-scale works.

“But if the projects did not raise enough money, the Treasury might get stuck paying back the investors, a prospect that gave pause to so-called deficit hawks like [Ohio Republican Congressman Pat] Tiberi. In an e-mail last week, he said he agreed the nation’s road and communications networks needed to be improved but was concerned about creating another company like Fannie Mae that might need a bailout.” Sheryl Gay Stolberg and Mary Williams Walsh, “Obama Offers a Transit Plan to Create Jobs,” The New York Times September 7, 2010.

Britain’s Public-Private Partnership built enormous financing charges into the cost of providing transport. London could have built the tube extension without running up public debts to the banks, paying the construction costs by funding the higher rent-of-location. America could do the same. In fact, in times past the United States financed public infrastructure out of progressive taxation that fell mainly on the wealthy, and by monetizing the budget deficit. But under  Obama’s plan, the rental value is to be capitalized into interest payments or simply kept by well-placed landowners.

It looks like President Obama sat down with Larry Summers, Tim Geithner and his other Rubinomics holdovers from the Clinton/Goldman-Sachs Administration and asked what policies can be funded without taxing the wealthy, but by borrowing via a separate entity – with a government guarantee like the Fannie Mae and Freddie Mac gravy train for Wall Street.

The cover story is always that giveaways to the wealthy are needed to employ labor.  (“Wall Street creates jobs.”) The Democratic excuse these days is that the economy won’t work without providing financial investors with “incentives.” The Democratic Leadership Council helped President Clinton accept the world as it is, rife with the fraud, crime and the proverbial free lunch as part and parcel of how the economy works. This certainly is how to attract campaign contributors and the Wall Street lobbyists that are designing today’s right-wing shift by Washington.
After its $13 trillion giveaway to Wall Street, the government has little debt-creating ability left in its budget to create jobs by public spending. Or so we are told. The giveaway money has not been lent out as promised to “get America back to work.” It has been paid out as bonuses to the bailed-out campaign contributors on Wall Street – and make offenders such as Bank of America and Citibank for their purchases of Countrywide, Wacovia and Washington Mutual (Wamu) whole for junk mortgages, on the pretense that a “sound banking system” is needed to get the economy moving again – the euphemism for pushing it further into debt.

But if there was so much money for bailouts, why is there any need to finance the fairly modest $50 billion transport initiative by borrowing instead of funding it out of the general budget?

There is no such need, of course. The program is simply an excuse for re-introducing Reaganomics as if the aim this time around is to “create jobs.” The way that  Obama proposes to do this threatens to price American labor even further out of world markets, by raising the cost of getting to work, and of renting or going into debt to buy homes and offices near the new transportation hubs. And I suspect that as in Britain, the new public-private agency will be non-unionized. Britain’s Public-Private Partnership still looms as the dress rehearsal for what we are getting into. 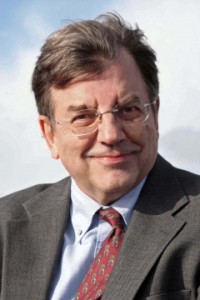 Michael Hudson is a former Wall Street economist. A Distinguished Research Professor at University of Missouri, Kansas City (UMKC), he is the author of many books, including Super Imperialism: The Economic Strategy of American Empire (new ed., Pluto Press, 2002) and Trade, Development and Foreign Debt: A History of Theories of Polarization v. Convergence in the World Economy. He can be reached via his website, mh@michael-hudson.com