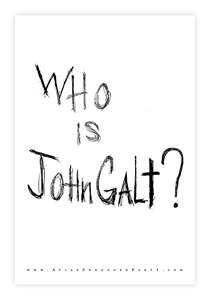 Whilst in New York I went along see Ayn Rand’s “Atlas Shrugged”.

What a shocker of a movie!  What a heavy-handed attempt to ensure that uber wealthy rent-seekers should remain free riders and not have to pay their fair share!

Ayn Rand’s impact on the Thatcher-Reagan era has been undeniable.  Are not the results of Rand’s pernicious influence patently now about us for all to see?  Namely: lower real wages since 1972; higher household debt; dangerously narrowing small business margins …. but obscene profits by banks and other rent-seekers.

Yes, and increasing government intervention has necessarily flowed from all these pathologies.

This period has been anything but “free enterprise” in action.

Yet, these people, this 0.01% which has cruelled our pitch and brought about an economic depression, now blames it entirely on government excess and socialism!

Forget their rent-seeking parasitism, and their passing off their responsibilities onto the 99.99%. They themselves are absolutely blameless. “It’s governments wot done it, gov, not us!”

I’ve said it before: their greed knows no bounds.

As if to underline the point, I see a Hungarian-born American billionaire (no, not George Soros), Thomas Peterffy by name, is taking out ads on US TV saying in effect “Leave us alone – or else you’re being socialist!” Maybe Peterffy also helped fund “Atlas Shrugged”?

No, Ayn Rand, Maggie Thatcher, Ronald Reagan, Tom Peterffy, et al – you’re wrong.  Whilst creeping socialism has been a pain, your actions have proven to be far worse.

Certainly, bloated government has aggravated the situation, but there is, of course, a third alternative which you fail to mention (and has not been tried) that frees up enterprise whilst precluding the rentier class from stealing from  the people, in order to make themselves billionaires at society’s expense.