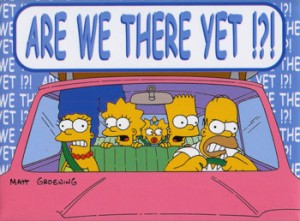 Here’s another analyst asking whether we’re in a depression yet.  He asks the right question but — because he finds himself able to ignore the totality of what’s occurring around the world — comes up with the wrong answer.

All but the online media has reached much the same conclusion: No, things are certainly not good, but technical definitions suggest we’re not in a depression – yet.

Seems we’ve only got to get serious when everyone agrees we’re in it, so it’s OK to leave bumbling politicians and economists directing us away from a fact that should have become so patently obvious to all of us by now.

Tax systems are a legacy of the days when land barons ruled the world. Those who monopolise land and key natural resources should not be expected to pay for the privilege. The plebs must pay, by means of taxes on their earned incomes and on their purchases.

Revenues must NOT be drawn from the unearned incomes of our natural resources!

We’ll even encourage the little people to become landholders, so they, too, will come to believe anything more than piddly municipal rates and state land taxes are not in their interests.

Problem is, the little people aren’t idiots. They’ve come to see that the tax system rewards real estate speculators and fines people for working and producing. But they’re too small-scale in property and will have to ratchet things up quite a bit.

As they attempt to do so, they inflate a gigantic property bubble as they proceed in what they perceive to be their best interest.

But, gee! It seems property prices don’t always go up?

And that, dear reader, is exactly where we are. Our revenue systems having given all the wrong signals, we are fresh out of effective demand.  Austerity won’t help us.  Printing money won’t help us.  Those measures only help the banks.

Whilst bumbling economists and politicians run around in circles trying to avoid this conclusion for as long as they can, there was a man of integrity in Australia who said we had to reverse things.  We need to capture more of the economic rent of our land and natural resources and abolish a lot of taxes, he said.  His name was Ken Henry.  He was Secretary of Australia’s federal Treasury.

But the bumbling economists and politicians with all their humbug didn’t like what Ken Henry said because challenging the 1% who thieve our land and natural resource rents and control the mainstream media might really offend them.  Can’t do that: they run the show!

So, the world will leave its tax regimes in much the same mire as they are in now, and keep on heading deeper into the economic mud – which apparently isn’t quite a depression, yet. 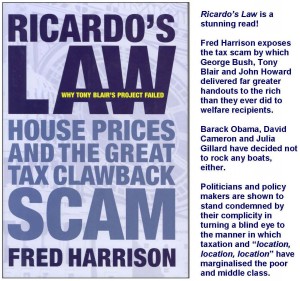