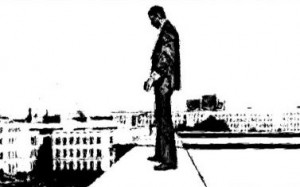 When you privatise society’s lifeblood for yourself, honesty demands you also acknowledge your parasitic nature.

But we seek to deny this fact in order to be able to live with ourselves.

This is not unlike the modern economist who claims his or her work is ‘value-free’.

If an economist is able to deny –

then he or she is certainly working without values!

That economic analysts refuse to deal with the private capture of publicly-generated land rents currently creates the world’s greatest hurdle. Credit and money are quite secondary considerations to the main issue, that is, rent-seeking.

So far Australia, which has had one of the biggest residential land price bubbles in the world and record household debt, has avoided much of the financial and social disorder seen elsewhere, but you simply cannot break the laws of rent, wages and interest—the laws of distribution–without ultimately experiencing the gravest of consequences.

To think otherwise is much the same as believing you can jump off a tall building without going ‘splat’ at the bottom.

Somewhere along the line we’ve got to start capturing more of the annual value of land to the public purse if the social and financial decay we’re currently witnessing isn’t to worsen.