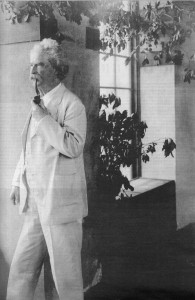 “Give me whereon to stand”, said Archimedes, “and I will move the earth.” The boast was a pretty safe one, for he knew quite well that the standing place was wanting, and always would be wanting.

But suppose he had moved the earth, what then? What benefit would it have been to anybody? The job would never have paid working expenses, let alone dividends, and so what was the use of talking about it?

From what astronomers tell us, I should reckon that the earth moved quite fast enough already, and if there happened to be a few cranks who were dissatisfied with its rate of progress, as far as I am concerned, they might push it along for themselves; I would not move a finger or subscribe a penny piece to assist in anything of the kind.

Why such a fellow as Archimedes should be looked upon as a genius I never could understand; I never heard that he made a pile, or did anything else worth talking about. As for that last contract he took in hand, it was the worst bungle I ever knew; he undertook to keep the Romans out of Syracuse; he tried first one dodge and then another, but they got in after all, and when it came to fair fighting he was out of it altogether, a common soldier in a very business-like sort of way settling all his pretensions.

It is evident that he was an over-rated man. He was in the habit of making a lot of fuss about his screws and levers, but his knowledge of mechanics was in reality of a very limited character. I have never set up for a genius myself, but I know of a mechanical force more powerful than anything the vaunting engineer of Syracuse ever dreamed of. It is the force of land monopoly; it is a screw and lever all in one; it will screw the last penny out of a man’s pocket, and bend everything on earth to its own despotic will. Give me the private ownership of all the land, and will I move the earth?

No, it is not good enough. Under the system I propose the fools would imagine they were all free. I would get a maximum of results, and have no responsibility whatever. They would cultivate the soil; they would dive into the bowels of the earth for its hidden treasures; they would build cities and construct railways and telegraphs; their ships would navigate the ocean; they would work and work, and invent and contrive; their warehouses would be full, their markets glutted, and:

The beauty of the whole concern would be
That everything they made would belong to me.

It would be this way, you see: As I owned all the land, they would of course, have to pay me rent. They could not reasonably expect me to allow them the use of the land for nothing. I am not a hard man, and in fixing the rent I would be very liberal with them. I would allow them, in fact, to fix it themselves. What could be fairer?

Here is a piece of land, let us say, it might be a farm, it might be a building site, or it might be something else – if there was only one man who wanted it, of course he would not offer me much, but if the land be really worth anything such a circumstance is not likely to happen. On the contrary, there would be a number who would want it, and they would go on bidding and bidding one against the other, in order to get it. I should accept the highest offer – what could be fairer?

Every increase of population, extension of trade, every advance in the arts and sciences would, as we all know, increase the value of land, and the competition that would naturally arise would continue to force rents upward, so much so, that in many cases the tenants would have little or nothing left for themselves.

In this case a number of those who were hard pushed would seek to borrow, and as for those who were not so hard pushed, they would, as a matter of course, get the idea into their heads that if they only had more capital they could extend their operations, and thereby make their business more profitable. Here I am again. The very man they stand in need of; a regular benefactor of my species, and always ready to oblige them. With such an enormous rent-roll I could furnish them with funds up to the full extent of the available security; they would not expect me to do more, and in the matter of interest I would be equally generous.

I would allow them to fix the rate of it themselves in precisely the same manner as they had fixed the rent. I should then have them by the wool, and if they failed in their payments it would be the easiest thing in the world to sell them out. They might bewail their lot, but business is business. They should have worked harder and been more provident. Whatever inconvenience they might suffer, it would be their concern, and not mine.

What a glorious time I would have of it! Rent and interest, interest and rent, and no limit to either, excepting the ability of the workers to pay. Rents would go up and up, and they would continue to pledge and mortgage, and as they went bung, bung, one after another, it would be the finest sport ever seen. thus, from the simple leverage of land monopoly, not only the great globe itself, but everything on the face of it would eventually belong to me. I would be king and lord of all, and the rest of mankind would be my most willing slaves.

It hardly needs to be said that it would not be consistent with my dignity to associate with the common rank and file of humanity; it would not be politic to say so, but, as a matter of fact, I not only hate work but I hate those who do work, and I would not have their stinking carcasses near me at any price. High above the contemptible herd I would sit enthroned amid a circle of devoted worshippers. I would choose for myself companions after my own heart. I would deck them with ribbons and gewgaws to tickle their vanity; they would esteem it an honour to kiss my glove, and would pay homage to the very chair that I sat upon; brave men would die for me, parsons would pray for me, and bright-eyed beauty would pander to my pleasures. For the proper management of public affairs I would have a parliament, and for the preservation of law and order there would be soldiers and policemen, all sworn to serve me faithfully; their pay would not be much, but their high sense of duty would be a sufficient guarantee that they would fulfil the terms of the contract.

Outside the charmed circle of my society would be others eagerly pressing forward in the hope of sharing my favours; outside of these would be others again who would be forever seeking to wriggle themselves into the ranks of those in front of them, and so on, outward and downward, until we reach the deep ranks of the workers forever toiling and forever struggling merely to live, and with the hell of poverty forever threatening to engulf them.

The hell of poverty, that outer realm of darkness where there is weeping and wailing and gnashing of teeth – the social Gehenna, where the worm dieth not, and the fire is not quenched – here is a whip more effective by far than the keenest lash of the chattel slave owner, urging them on by day, haunting their dreams by night, draining without stint the life blood from their veins, and pursuing them with relentless constancy to their graves. In the buoyancy of youth many would start full of hope and with high expectations; but, as they journeyed along, disappointment would follow disappointment, hope would gradually give place to despair, the promised cup of joy would be turned to bitterness, and the holiest affection would become a poisoned arrow quivering in the heart!

What a beautiful arrangement – ambition urging in front, want and the fear of want bringing up the rear! In the conflicting interests that would be involved, in the throat-cutting competition that would prevail, in the bitterness that would be engendered between man and man, husband and wife, father and son, I should, of course, have no part. There would be lying and cheating, harsh treatment by masters, dishonesty of servants, strikes and lockouts, assaults and intimidation, family feuds and interminable broils; but they would not concern Me.

In the serene atmosphere of my earthly paradise I would be safe from all evil. I would feast on the daintiest of dishes, and sip wines of the choicest vintage; my gardens would have the most magnificent terraces and the finest walks. I would roam mid the umbrageous foliage of the trees, the blooming flowers, the warbling of birds, the jetting of fountains, and the splashing of pellucid waters. My palace would have its walls of alabaster and domes of crystal, there would be furniture of the most exquisite workmanship, carpets and hangings of the richest fabrics and finest textures, carvings and paintings that were miracles of art, vessels of gold and silver, gems of the purest ray glittering in their settings, the voluptuous strains of the sweetest music, the perfume of roses, the softest of couches, a horde of titled lackeys to come and go at my bidding, and a perfect galaxy of beauty to stimulate desire, and administer to my enjoyment.

Thus would I pass the happy hours away, while throughout the world it would be a hallmark of respectability to extol my virtues, and anthems would be everywhere sung in praise.

Archimedes never dreamt of anything like that. Yet, with the earth for my fulcrum and its private ownership for my lever, it is all possible. If it should be said that the people would eventually detect the fraud, and with swift vengeance hurl me and all my courtly parasites to perdition, I answer, “Nothing of the kind, the people are as good as gold, and would stand it like bricks – and I appeal to the facts of today to bear me witness.” 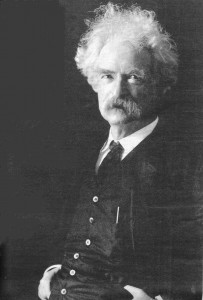 “Archimedes” was first published in the Australian Standard in 1887 under the name “Twark Main.”

Questions have therefore been raised about its authenticity, but experts agree it’s authentic, not only because it is stylistically Twainian, but because it precurses other Twain writings. An imitator would have had to not only duplicate Twain’s style, but have anticipated some of his future statements.      – Dan Sullivan