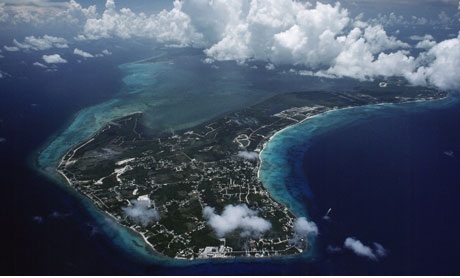 The Cayman Islands: a favourite haven from the taxman for the global elite. Photograph: David Doubilet/National Geographic/Getty Images

A global super-rich elite has exploited gaps in cross-border tax rules to hide an extraordinary £13 trillion ($21tn) of wealth offshore – as much as the American and Japanese GDPs put together – according to research commissioned by the campaign group Tax Justice Network.

James Henry, former chief economist at consultancy McKinsey and an expert on tax havens, has compiled the most detailed estimates yet of the size of the offshore economy in a new report, The Price of Offshore Revisited, released exclusively to the Observer.

He shows that at least £13tn – perhaps up to £20tn – has leaked out of scores of countries into secretive jurisdictions such as Switzerland and the Cayman Islands with the help of private banks, which vie to attract the assets of so-called high net-worth individuals. Their wealth is, as Henry puts it, “protected by a highly paid, industrious bevy of professional enablers in the private banking, legal, accounting and investment industries taking advantage of the increasingly borderless, frictionless global economy“. According to Henry’s research, the top 10 private banks, which include UBS and Credit Suisse in Switzerland, as well as the US investment bank Goldman Sachs, managed more than £4tn in 2010, a sharp rise from £1.5tn five years earlier.

The detailed analysis in the report, compiled using data from a range of sources, including the Bank of International Settlements and the International Monetary Fund, suggests that for many developing countries the cumulative value of the capital that has flowed out of their economies since the 1970s would be more than enough to pay off their debts to the rest of the world.

Oil-rich states with an internationally mobile elite have been especially prone to watching their wealth disappear into offshore bank accounts instead of being invested at home, the research suggests. Once the returns on investing the hidden assets is included, almost £500bn has left Russia since the early 1990s when its economy was opened up. Saudi Arabia has seen £197bn flood out since the mid-1970s, and Nigeria £196bn.

The sheer size of the cash pile sitting out of reach of tax authorities is so great that it suggests standard measures of inequality radically underestimate the true gap between rich and poor. According to Henry’s calculations, £6.3tn of assets is owned by only 92,000 people, or 0.001% of the world’s population – a tiny class of the mega-rich who have more in common with each other than those at the bottom of the income scale in their own societies.

“These estimates reveal a staggering failure: inequality is much, much worse than official statistics show, but politicians are still relying on trickle-down to transfer wealth to poorer people,” said John Christensen of the Tax Justice Network. “People on the street have no illusions about how unfair the situation has become.”

TUC general secretary Brendan Barber said: “Countries around the world are under intense pressure to reduce their deficits and governments cannot afford to let so much wealth slip past into tax havens.

“Closing down the tax loopholes exploited by multinationals and the super-rich to avoid paying their fair share will reduce the deficit. This way the government can focus on stimulating the economy, rather than squeezing the life out of it with cuts and tax rises for the 99% of people who aren’t rich enough to avoid paying their taxes.”

Assuming the £13tn mountain of assets earned an average 3% a year for its owners, and governments were able to tax that income at 30%, it would generate a bumper £121bn in revenues – more than rich countries spend on aid to the developing world each year.

Groups such as UK Uncut have focused attention on the paltry tax bills of some highly wealthy individuals, such as Topshop owner Sir Philip Green, with campaigners at one recent protest shouting: “Where did all the money go? He took it off to Monaco!” Much of Green’s retail empire is owned by his wife, Tina, who lives in the low-tax principality.

A spokeswoman for UK Uncut said: “People like Philip Green use public services – they need the streets to be cleaned, people need public transport to get to their shops – but they don’t want to pay for it.”

Leaders of G20 countries have repeatedly pledged to close down tax havens since the financial crisis of 2008, when the secrecy shrouding parts of the banking system was widely seen as exacerbating instability. But many countries still refuse to make details of individuals’ financial worth available to the tax authorities in their home countries as a matter of course. Tax Justice Network would like to see this kind of exchange of information become standard practice, to prevent rich individuals playing off one jurisdiction against another.

“The very existence of the global offshore industry, and the tax-free status of the enormous sums invested by their wealthy clients, is predicated on secrecy,” said Henry.

3 thoughts on “BEST REASON TO TAX THEIR LAND: IT CAN’T FLEE THE COUNTRY”