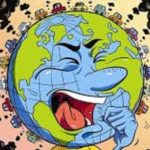 We were all meant to be wealthy by now – new technologies having assisted the means of production and service delivery. Instead, what we’ve inherited is a world gone mad, and in debt.

Where did all the wealth go?

Look around you. Obviously, it’s gone mainly to those at the very top. No, not just to the one per cent, but especially to the one-tenth of one per cent.

How could they have possibly done it?  How come we didn’t we notice?

I hate to tell you this, but it’s because we’ve all been taken for fools and become happy to work as wage slaves in the forlorn hope that if we work hard enough we’ll have our share of the surplus wealth we create. However, the distribution of created wealth didn’t flow equally to all–it didn’t even trickle down–it shot up in a gusher, into the hands of the 0.1 per cent.

Many erudite contemporary studies show how the middle class is being hollowed out and coming to join in the travails of the poor and dispossessed. These studies come out ad nauseam – without satisfactory resolution.

Similar erudite studies, often aided by mathematical formulae show how our tax regimes are failing us. These come out ad infinitum – but without sensible answers.

You see, you’re allowed to write about bad outcomes, but you’re not allowed to mention the remedy to these, because “there are no easy solutions”.

But there are, you know.

The general public has simply got to capture for revenue that 25 per cent of the economy known as ‘surplus product’, ‘unearned income’, or ‘economic rent’ which the 0.1 per cent takes for itself.

By taking unearned income for themselves, the big ‘rent-seekers’ are acting little differently from chattel slave owners of yore. Worse! At least chattel slaves were fed, clothed and housed by their ‘masters’.

Only thing is, by the 0.1% stealing unearned incomes or economic rents–owed equally to everyone as a societal dividend–investment declines in goods and services other than banking, real estate, and insurance, as do wages and earned profits. On top of this, we make the critical mistake of taxing earned incomes and goods and services, because the rent-seekers, our betters, tell us that’s what we should do.  And we’ve been stupid enough to believe them!

So, as economies grind to a halt, you might want to consider the devastation rent-seeking, particularly in our natural resources, is wreaking across the world.

You might even want to rise up on your hind legs to rectify this stupidity? To date, our politicians are obviously not interested. They’re too busy representing the rent-seekers.

Brexit was largely a protest against the status quo.  It would be nice if protesters understood the rent-seeking mechanism which keeps them suppressed.