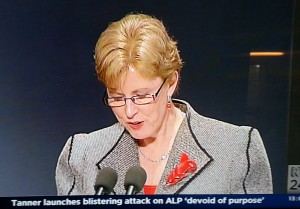 Today’s address by Greens Senator Christine Milne to the National Press Club was everything a political address should be.

“An economy that serves people and nature” was big picture stuff.  It was positive, relevant, informative, and offered the nation an optimistic outlook where peoples’ happiness should be included as a national criterion.

If the latter sounds like a typical ‘motherhood’ political statement, it wasn’t.  It was well supported by plenty of policy detail – including the need to shift the tax system towards Ken Henry’s aspirations for Australia’s future tax system.

“Oh, but they can say these high-minded things because they’re unlikely to attain political power in their own right!” doesn’t quite cut it any longer when Milne painted such a all-encompassing picture, so markedly different from that of the Labor and Liberal parties.

That the Greens are having their programs costed also sets them and Labor apart from the Libs. [Wha …! Greens having their policies costed now?]

Maybe Milne’s address–no doubt to be nit-picked by nihilist journos in tomorrow’s newspapers–might even herald a long-awaited change from the major parties. [Michele Grattan, unable to resist dropping the tag “frustrating party” on the Greens, was handled well in response by the Green’s leader.]

Instead of abuse and game-playing, a bit of vision from all parties, as expounded today by Christine Milne, would go a long way with Australia’s voters, if not its media commentators.

3 thoughts on “A POLITICAL PARTY WITH SOMETHING REAL TO SAY? GREENS?”