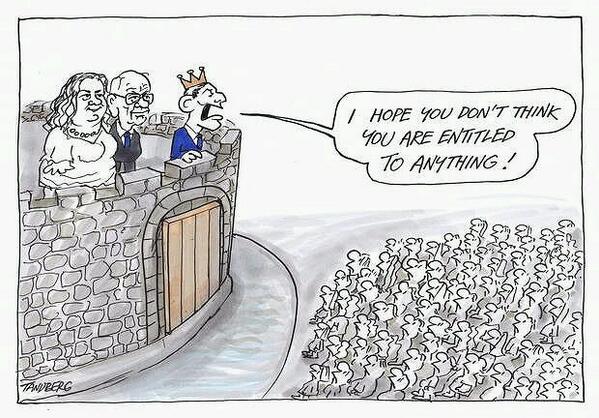 Can we accept for the moment that the 99.9% are not doing quite as well as the 0.1% – and it seems to be getting worse, rather than better?

Without being accused of exaggeration may I suggest the plebs are starting to feel a little aggrieved and hard done by, whilst our masters seem to be doing exceptionally well?

Well, the plebs have been given a vote, you see, and for whom are they going to vote at a time like this: 1) the major parties that have taken it in turns over the last 45 years to gradually deliver the plebs and our masters to this point in history, or 2) some saviour out of left field?

Certainly not, but at least the plebs have called out the political parties on their naked support of our masters as they stole from the plebs?

But the plebs and their political parties don’t get it, and our masters still retain strong support from many of the plebs who know their place in life and who don’t want to be forced into the arms of ‘saviours’.

Are you still with me?

So, we have a conundrum here. The plebs and our masters are witnessing the rise and rise of saviours, and the absolute intransigence of major political parties. Meanwhile, our masters continue to live off the theft of the plebs’ natural resource rents.

In this scenario, as much as I’d like to be optimistic about the direction world economies and politics have taken, may I suggest things are going to get far worse for the plebs before they’re likely get any better?

3 thoughts on “A POLITICAL ANALYSIS”