It used to bother us whenever unemployment grew beyond 1%, but those days disappeared once policy-making economists decided we needed a decent pool of unemployed people, in order to stop wage inflation, and possibly to keep workers from getting a delusion of grandeur that it was they, not the 0.1% or banks, who are the producers of wealth.

I’d argue, however, that something other than the natural rate of unemployment is afoot – and that the concept of NAIRU arose to explain and justify post-hoc the phenomenon of declining average real wages that has persisted from the early 1970s.

Like the 1971-73 worldwide bubble in land prices, so ably documented in a special supplement in TIME magazine of 1 October 1973.  This gargantuan real estate hike is second only in extent to the current bubble which has floored world economies (which similar fate still hovers over China, Canada and Australia like the sword of Damocles).  We hear a lot about the 1970s OPEC crisis, but zero about that 1971-73 real estate bubble.

What generates these bubbles?  I put the case to the Henry Tax Review that is was a fractured set of tax policies which fines wage earners and earned company profits (as distinct from unearned bank and mining super-profits) that foster rent-seeking in our land and natural resources.

I was hoping that workers, the union movement, the Labor Party—or even the Liberal Party—might have picked up on the following chart I supplied in my submissions. It’s based upon a paper by Dr Terry Dwyer, formerly a tax expert within federal Treasury, who assessed Australia’s economic rent since 1911. It shows workers and businesses to be fighting over what’s left of incredibly declining net incomes after taxation and rent-seeking.  But although the Henry Review may have listened (given its recommendations for an all-in land tax), neither of the main parties nor the union movement appears have picked up on this critical point. [Huh? A land tax?]

One critic noted that my technique has left capital gains in ‘net earned incomes of labour and capital’. That’s so, but it actually worsens the case that incomes, net of taxation and economic rent, are continuing to disappear towards zero.

Instead of “It’s the economy, stupid!”, may I put the lonely proposition: “It’s our rent-seeking, stupid!”? 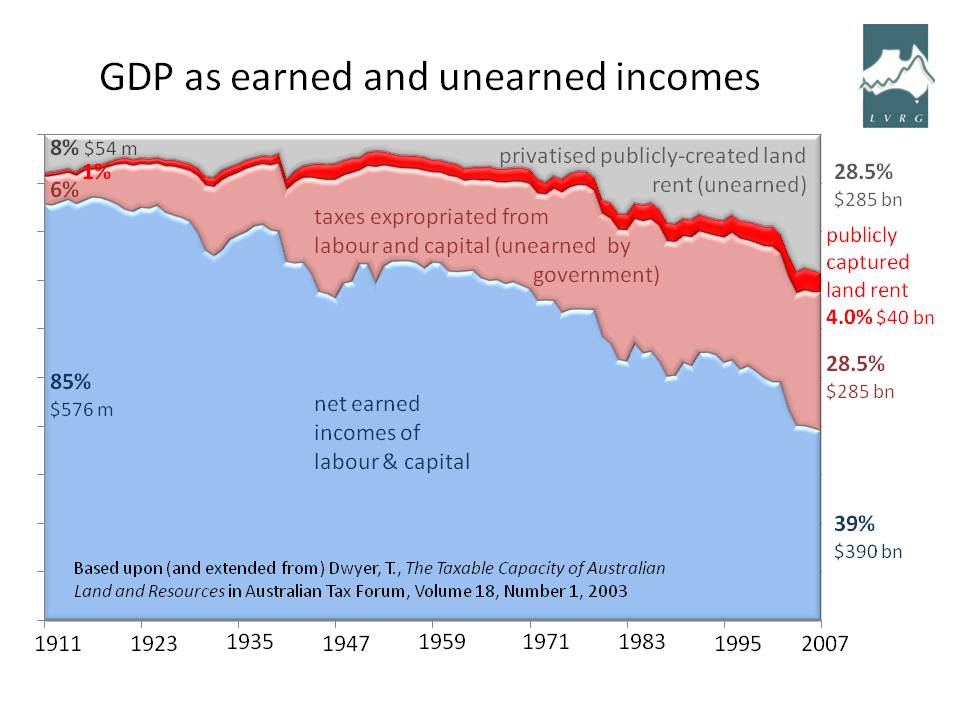