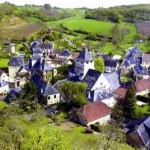 Once upon a time there was a man who thought work was a fool’s game. He had a plan. He would make people his slaves. Not slaves who get food, clothing and shelter from their master. No, worse: they would have to pay for their own upkeep.

His plan was this. Land was very cheap and the townspeople prosperous–himself included–so he proceeded to buy up all the land he could.

After a while, he owned much of the land in town and virtually all of the land on its outskirts. People at first paid him modest rents, or else fairly low prices to buy a block of land.

But as the man’s rents grew and land prices increased, the townsfolk coincidentally seemed to grow much poorer. Some became unemployed and many couldn’t afford to pay for the land that had once cost them very little. Whereas there had been no unemployment at all, they had now come to regard an unemployment rate of 5% as pretty darn good: if only it could be got back down to that level!

The man called a town meeting. “We’ve got to do something for our poor”, he challenged them. “If we all chip in part of our wages and salaries, we can create a safety net for the unemployed and dispossessed and give them a little human dignity. I’m better off financially than most of you, so I don’t mind if I contribute the most. I’m also going to set up a number of charities.”

The townspeople thought these were great ideas. They voted to put them into effect, and wholeheartedly proceeded to elect this honorable man the mayor of the town.

Unaccountably, the mayor’s rents and land prices seemed to escalate, and those townspeople who still had jobs had to work for less. Some even went to work for the mayor. He had created employment for them, so he became more highly-regarded. The reverend thought him to be a true saint and promoted the mayor’s charities from the pulpit.

Some of the town’s unemployed turned to crime, so the number of town policemen grew. “This is a product of the times, a truly bad part of the business cycle”, the mayor declared …. “although [sotto voce] some people just can’t be helped, can they?”

He set up a committee to inquire into why the town’s productivity continued to decline and social cohesion had broken down.

The productivity committee reported that the town would have to be more innovative in its approach to work and business. Also, people would have to work a lot harder and their wages and salaries would have to be drastically cut, because they were clearly  too high.  A minority opinion suggested matters of credit and the town’s money supply needed to be studied in depth, because there was too much debt in the town and housing had become completely unaffordable.