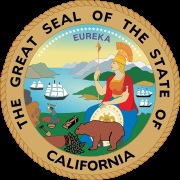 Howard Jarvis and Paul Gann are the men responsible for turning the once ‘Golden State’ of California into the economic basket case of the USA.

What did they do?

They garnered support for the “People’s Initiative to Limit Property Taxation”, otherwise known as “Proposition 13” to cut the property tax, ostensibly to stop the property tax from driving older Californians out of their houses, but in reality to appease the landlord lobby for whom Jarvis worked. Landlords had become increasing unhappy with the incidence of the property tax on their net yields, especially through the 1970s recessions.

The USA property lobby, then emboldened by the success of Proposition 13, got behind a similar push in 30 other states, most of which proved unsuccessful. This was promoted by selling the fact that cutting the property tax would help property owners. Nothing was said about how resultant budgetary shortfalls were to be financed.

The carrying of Proposition 13 in 1978, of course, meant that Californian budgets were forced to rely on alternative taxes which slowly but surely began to erode its prosperity.  Government spending excesses compounded the problem.

To this day it’s arguable that most Californians still can’t figure what happened to them.  Were they to examine the miscarriage that has become their property tax base, they’d get an inkling.

The end: California had the biggest property boom in the United States, the median property price in April 2005 being $500,000.  Orange County, Ventura County and the San Francisco Bay Area had median prices around $650,000.

As home prices plummeted in 2007 and 2008 after the housing bubble burst, many thousands of homes have been foreclosed. 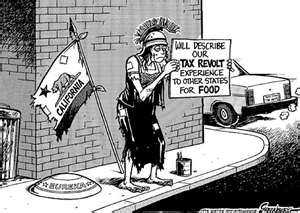