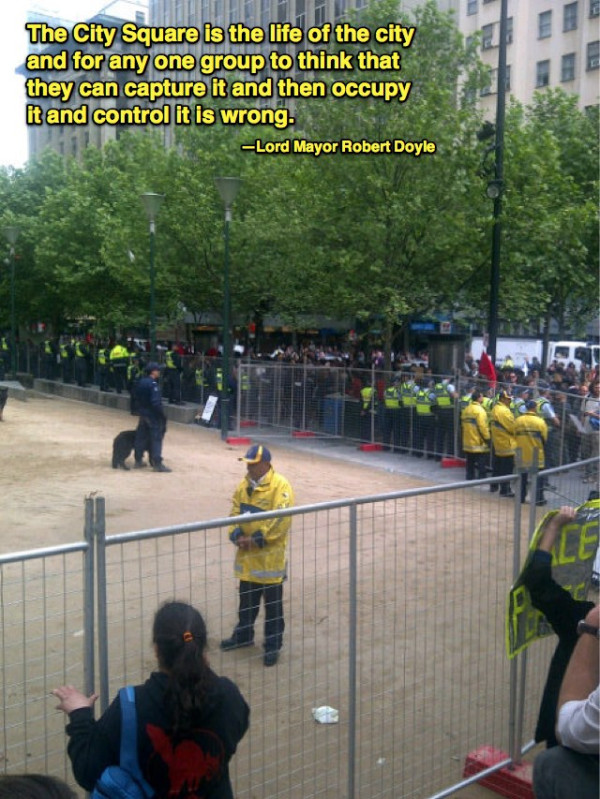 Well, I WILL add a comment (from ABC radio):

MARK COLVIN: Riot police with dogs, horses and capsicum spray have been out against Occupy Melbourne protesters today. Since last Saturday a small group of protesters had camped out in the city square protesting against corporate greed.

But things turned ugly at lunchtime today. The action to disperse the protesters closed off the inner city to traffic and trams for four hours. At least six protesters and two police officers were injured and at least 20 protesters were arrested this afternoon.

ALISON CALDWELL: It was just before midday when around 400 police descended on the Occupy Melbourne protesters. Riot police with dogs and horses pushed the protesters out of City Square and up into Swanston Street on the corner of Collins Street.

Protesters who fell to their feet were dragged away by police. Some complained of being capsicum sprayed.

PROTESTERS (Chanting): We are Occupy Melbourne. We are the 99 per cent.

ALISON CALDWELL: The protesters who’d spent the past week camped out in Melbourne’s city square alongside a five-star hotel with luxury boutique stores and an American coffee chain; all symbols of corporate excess according to the protesters.

Karl Fitzgerald is with a group calling itself Prosper Australia.

KARL FITZGERALD: Our prime concern is the corporate control over our very lives. The influence of lobbyocracy distorting what was once known as democracy. And, of course, the big one, the dominance of speculative capitalism that is undermining so many people’s freedoms. You can’t do much when you’ve got no money in your wallet. And the housing boom is only good for a few people, not the majority.

ALISON CALDWELL: He says there was no need for police to be so heavy handed.

KARL FITZGERALD: People were, you know, really were staunchly defending what was once the city square. It’s now been cleansed, another corporate cleansing going on, and what a pity when we had such a festival of community going on for the last week.