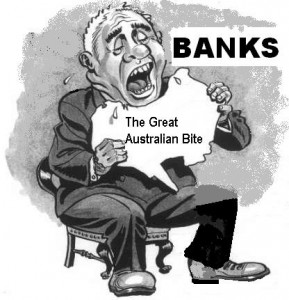 SLOWLY, THEY’RE COMING AROUND TO REALITY

Now that hard liners amongst the financial commentariat (bank economists, property spruikers and the odd journo), are about the only people left denying the Australian property bubble, the IMF has seen the light. But only 20% overpriced, IMF?  Try 40% – minimally.

“We were simply being responsible”, the deniers will tell us when the bubble does finally burst. (Hi, Rory Robertson! Hi, Chris Joye!) “The public can’t handle the truth and, anyway, we’ve got to use the time we’ve got left to arrange our affairs to make sure we aint left holding the bag!” They’re having a bit each way.

Hey! And how about Mike Smith of the ANZ bank showing more front than Myers in hanging it on shadow treasurer Joe Hockey yesterday for criticizing the banks? You’ll soon have reason to rue that self-important piece of balderdash, Mike. (Maybe  you actually believed predecessor Don Mercer when he said Australians had learnt the lesson from the devastating 1980s property collapse, and we won’t allow it to happen again?)

Bankers believe they’ve perfected rent-gouging. They feed out excessive credit to borrowers so they compete wild-eyed against each other, inflating land price bubbles. Then, the financiers divert the public’s land rent to themselves, receiving rent both in principal and interest repayments, on hyper-inflated property prices. Rent-gouging is a great trick, but has a habit of crashing the financial system every 18 years. So, shouldn’t we be putting an end to it, instead of mindlessly repeating it?

However, the answer to bank chicanery is NOT regulation, nor applying arbitrary bank lending limits, as is being advocated in some quarters. We’ve got to solve it permanently, by taking the rent of land back into the public domain because it’s society, not the banks, that creates it.  Banks won’t then be able to lend against escalating land prices.

Not only would this action keep a ceiling on land prices (the dynamic factor in property bubbles), but it would permit taxes to be abolished and for the economy to be got into gear.

Unfortunately, this is not the direction in which nations already into Phase One of the depression are headed; they believe they’ll be able to control excessive lending through regulation.  Fat chance!

Having seen the errors of bank bailouts and Quantitative Easings 1 and 2, Australia will be in an excellent position not to repeat them.

Every Australian property already has a recent land value assessment attached to it, so it would be possible to abolish state taxes such as payroll tax, stamp duty and their poorly-designed land taxes overnight, and to replace them with a federal land tax rebated back to the states, as advocated by Ken Henry’s “Australia’s Future Tax System” panel.

Let’s hope Joe Public can be introduced to its logic by means of the public review of Henry’s tax system recommendations next year. Such a positive tax shift can only be made if the public has been educated to its merits.

Australia has experienced the world’s biggest and most extended real estate bubble, so, to be first to employ the GFC’s only real solution will help soften the damaging fallout.