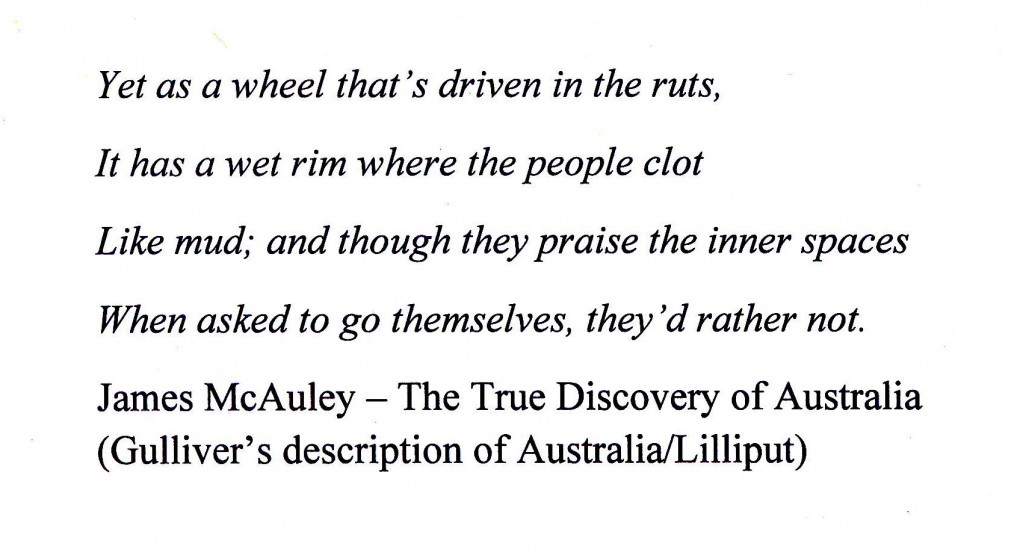 Most people are clearer about the need for Australia to decentralise its population than they are about the niceties that distinguish Julia Gillard’s re-badged ministry for Sustainable Population from those minister Tony Burke exercised in his recently constituted role as Kevin Rudd’s minister for Population. The new title sounds better, though.

Five months out from the Victorian election, the regions are being courted again. If the coalition wins government, it has promised to spend $1 billion on looking after them. On the other hand, the Brumby government says it will move 400 public servants to Ballarat, Bendigo and Moe, spend $100 million to lure students away from Melbourne and $260 million on infrastructure in its $600 million 5 year decentralisation package.

State and federal governments over the years have attempted to address the exaggerated drift of population from the regions that James McAulay noted clots “like mud” to Australia’s coastal capitals. It’s patently wrong that rural and regional areas must wait patiently until the government of the day looks like losing an election before the regions are thrown a few more scraps.  A fairer system must be possible.

Attempts at decentralisation have met with little success because the techniques employed have been fundamentally flawed, ranging from such approaches as offering taxpayer-funded incentives to businesses, to the re-location of government departments. These have come at a significant cost to taxpayers – the Whitlam government’s involvement in the Albury-Wodonga project springs to mind – and the temporarily-arrested population loss from those regions selectively favoured has eventually resumed.

In some respects Canberra stands out as an exception. Whilst it may skeptically be put that you’d have to expect a federal public servant-based city to blossom strongly, this would be to ignore the method under which Canberra was founded. With some tweaking it might even offer an effective model to assist Australia to effloresce, to decentralise.

Canberra was established on a leasehold system of land tenure whereby, if people agreed to pay the rent on a piece of land secured under a long term lease, the land was theirs, provided they built a house on it. The rent being many times less than the capitalised price they’d have to pay for a block of land in other capital cities, the wondrous new land management tool initially encouraged people to settle in Canberra. The proceeds went into funding the running of Canberra.

But by 1971 lawyer Frank Brennan documented in “Canberra in Crisis” how vested interests had effectively dismantled the Canberra leasehold system by ensuring that the city failed to capture anything like the national capital’s full market site rents. ACT taxation accordingly began to escalate to fill the revenue vacuum generated by this failure.

Later, in an article entitled “Canberra’s leasehold legacy” in the ANU Reporter of 21 September 1994 Dr Julie Smith reported that the once effective leasehold system designed to “take the load of the cost of the creation of the Commonwealth off the backs of the people of Australia” had finally been scuppered: “Once housing costs in Canberra were among the lowest in Australia. Now they are comparable to the other cities. This is no coincidence.”

[So this must now be the ultimate irony?]

However, it isn’t necessary that Australia reconstitute itself under a leasehold system of landholding in order to stimulate the regions; only that it capture significantly less revenue from employment, thrift and industry and more from rates and taxes on land values.

This would finally address a pathological revenue system that supports capital city development at the expense of the regions. The existing bias actually explains much of the population drift to the capital cities: that’s where the jobs are because that’s where the tax advantages and best infrastructure are both to be found.

The Rudd Government recently ruled out in the strongest terms any possibility that it would introduce Ken Henry’s panel’s recommendation that a comprehensive land tax should be used to replace iniquitous taxes such as payroll tax and stamp duties. This thereby ensures that Australia will continue to pay lip service to decentralisation.

Insofar as it ignores Canberra’s brilliant genesis this is most regrettable. It wrongly assumes that people can’t be educated to the fairness of paying revenue based upon the value of relative locational benefits.

It’s worth noting that not only would an across-the-board higher level of rates and land taxes assist the regions – provided other taxes are reduced or abolished accordingly – but it would also act to put a ceiling on escalating land prices and the attendant mortgage debt currently being shouldered by Australian households.

The latter approach to decentralisation would, of course, be anathema to the same interests that sabotaged the successful ACT experiment, which is somehat similar to mining billionaires labelling the proposed Resource Super Profit Tax “another big tax” when it is, in fact, a natural resource rent owed to the public purse.

The economics textbooks tell us that public capture of land and resource rents can’t be passed on in prices or affect production incentives adversely, and Julia Gillard’s today re-naming the miners’ “super profits tax” a “resource rent tax” seems to acknowledge this point at last.

Decentralisation is obviously necessary if Australia is to unclog its capital cities and utilise the infrastructure available in the regions.  Many people are beginning to wonder, however, whether a bi-polar party-political system, funded to a large extent by vested interests, is any longer capable of acting in the best interests of the Australian people.

Recent history suggests the two major parties are increasingly in the thrall of sectional interests and paid lobbyists. This has come at a great cost to the national interest and to our rural and regional areas.