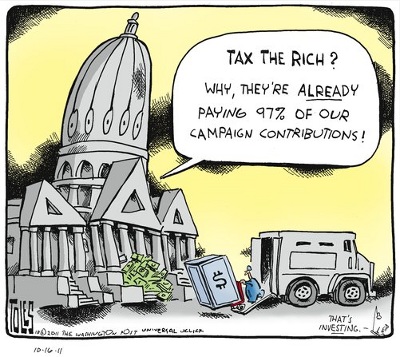 And, of course, a flat rate charge on land values will pick up the mega rich (and the rest of us) quite nicely.  Problem is, the ultra wealthy push the poor widow to the fore to carry their argument against it–but she can be accommodated!–and the ‘two-bob toffs’ will also come out of the woodwork to object.  (The latter are quite used to being stolen from; taxed on all their comings and goings, so they don’t see there are PRINCIPLES involved.)

The holding of other natural resources, too, is the complementary sine qua non, of course:  proper charges on oil, mineral, fishing, forestry & spectrum licenses, etc.

7 billion population?  More than ever, we need to ensure a thoroughgoing stewardship of the planet: that land is protected, used efficiently, isn’t monopolised or misused, nor held unreasonably out of use.

There IS an answer: the capture of economic rents and abolition of all arbitrary taxation imposed by those who would rape and abuse the planet.