Georgism has a long pedigree. It was alive and well in biblical times: “The land shall not be sold forever, for the land is Mine; and you are but strangers and sojourners with Me” (Leviticus 25:23).

In terms of disposable income, Thorold Rogers’ “Six Centuries of Work and Wages” tells us British prosperity achieved a peak in the 1490s that it has been unable to match ever since, when the humble labourer with a family of five still had 65% of his salary left after providing for food, clothing and shelter.

But the lords of the land, having begun to throw off their feudal responsibilities to the King as early as Magna Carta, were now certainly winning the day.

Richard Cobden documented the process in an 1845 parliamentary debate on the Corn Laws: 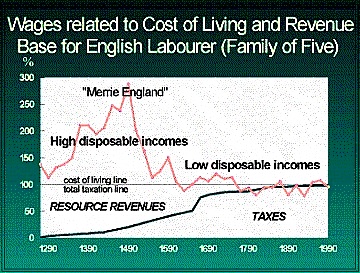 Similarly, in 1907, Georgism/landism/the Single Tax/the Feu/the Quit Rent was urged upon Russian Prime Minister Peter Arcadievich Stolypin by Leo Tolstoy as the most equitable way to appease an increasingly angry citizenry. Stolypin failed to do so, was assassinated, and the communist revolution resulted.

Back in Britain two years later the people took to the street to celebrate “The People’s Budget” which was to incorporate a national land tax. The lords of the land thought this was a bad idea and broke tradition to block the budget, preferring to wage WWI than support a land tax.

So wars continue to be fought over territory and resources, because of the failure to apply Georgism.

But despite the rationale behind Georgism and its long history, we continue to sweep it under the carpet, as so admirably once explained by Dr FWG Foat.

Why? Aren’t we better than suckers for the plutocracy?