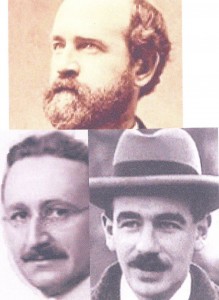 Fight of the Century, Round 2, is a brilliant video.

Keynes v. Hayek touches on ‘bubbles’; but do you hear them actually mention land or real estate? No, nothing.  It wasn’t there.

Even the Austrians, who come pretty close, manage, like Keynesians, to make what’s real – no, not money nor debt – LAND, disappear into the ether. (Geo-libertarian Dan Sullivan challenges libertarians to recognise this mocking stumbling block.)

I like this recent dismissal of the Austrians – well, of Murray Rothbard in particular – from a colleague on a Georgist school discussion site:-

Murray Rothbard.  I consider that he was confused. He extolled the free-market, but could not see it was rigged, or gave any real method of ensuring it would remain unrigged and free.

His view of landed property, was that once you mix your labour with land, all profit and rent extracted from it becomes the landowner’s, 100% until you sell the land. What we have now.

He believed that, as a result, individuals owned the fruits of their labor. So, full LVT should appeal to him, and eliminate income tax. He was not a great fan of LVT at all.

He created the rather odd Rothbard’s Law that, “people tend to specialize in what they are worst at.  Henry George, for example, is great on everything but land, so therefore he writes about land 90% of the time. Friedman is great except on money, so he concentrates on money.”

Rothbard fails to see where community created wealth ends up.

If there’s a point to be made, I reckon it can always be put simply.

One thought on “FIGHT OF THE CENTURY? NO, THE CHAMP’S MISSING”