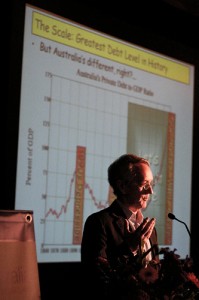 I attended the first day of the Australian Property Institute’s Annual State Conference at Crown Casino on Friday, before venturing off into the evening to witness my once-mighty Geelong humbled by Collingwood at the MCG.

Conference master of ceremonies, financial journalist Michael Pascoe, deftly introduced and posed questions to a diverse range of speakers across a wide range of property-related topics.

No speech was as legally forensic as Ian Pitt’s details of the bureaucratic impossibilities facing valuers in Melbourne’s five growth areas now overseen by the Growth Areas Authority.

And none was more impassioned than John Anderson’s account of the enjoyment, risks and tribulations in founding Contiki Tours forty-six years ago, at the age of twenty-two.

However, in a presentation suggesting that population and shortage of supply actually support the existing levels of Australian residential property prices, Christopher Joye, the managing director of the research group, Rismark, decided to venture into personal abuse to smear  Associate Professor Steve Keen of the University of Western Sydney as an “Aussie Roubini-wannabe”.   Keen was not in attendance.

I might add that I didn’t see Christopher Joye’s name next to Keen’s among the twelve economists who forecast this global financial crisis.  Envious, perhaps, Chris?

Joye sneered at Keen’s 2008 forecast that house prices are going to fall 40 per cent or so in the next few years and in his 2010 opinion that he now expects to see an accelerating rate of decline in house prices.

(All Roger Babson’s such as Keen seem fated to be met with derision from those whose interests are wedded to the status quo, I mused.)

Fortunately, towards the end of the day, RMIT Associate Professor of Property, David Higgins more generously allowed that the residential market may be artificially inflated.

His statistical analysis then proceeded to show that government manipulation appears to account at least in part for Australia’s inflated residential markets.  This, it seems, is especially before an election and warrants further investigation.

Higgins’ paper “The impact of political risk on Australian house prices” appears in the September 2010 issue of the Australia and New Zealand Property Journal.

Summary?  A brickbat for Joye’s descent into ad hominem, and a bouquet for Higgins’ more thoughtful analysis of the overheated Australian residential market.