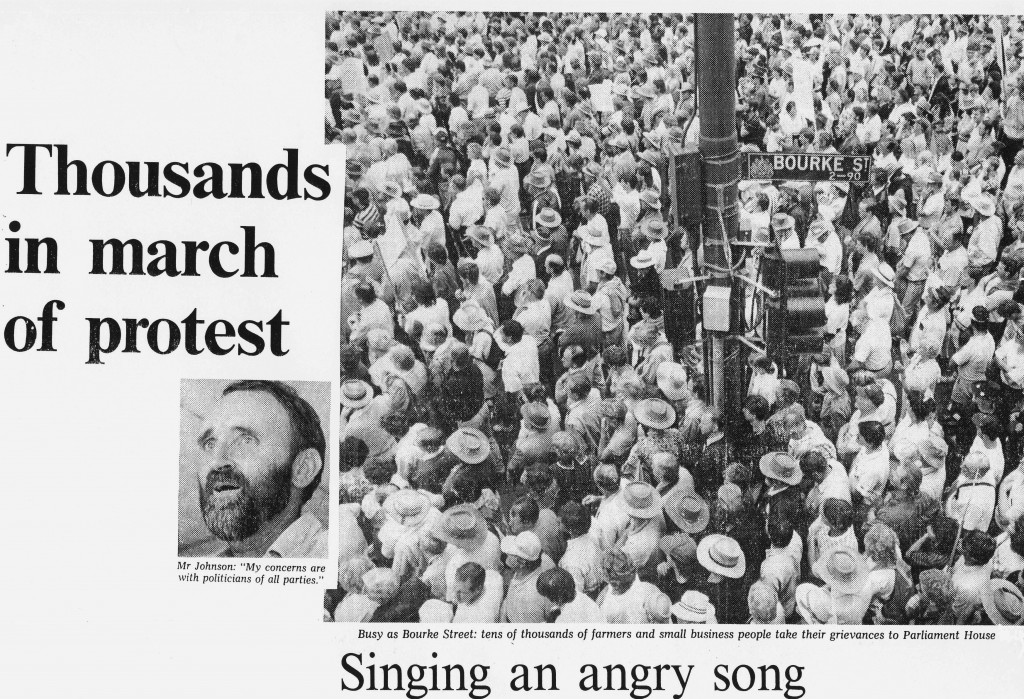 THE EVER-UNSPOKEN POINT OF ECONOMIC PROTEST

On 4 January 1991, Danny Johnson, a small businessman from the bush town of Warracknabeal in Victoria led 50,000 farmers and small business people to the steps of Parliament House in Melbourne. He called for a mechanism which would place some sort of control on politicians “of all parties”.

Australia was about to dive into Paul Keating’s “recession we had to have”, and Johnson and his followers saw their political representatives as being responsible for the terrible mess into which the state of Victoria had degenerated in the wake of the late-1980s commercial real estate bubble.

The media branded the rally as being “right wing”; some suggested maybe it had an association with the neo-fascist League of Rights.

Twenty years later, right wing US shock jock Glenn Beck yesterday led a massive Tea Party rally to the Lincoln Memorial in Washington to protest that the financial crisis is the result of government running amok in the USA. “Restore Honor” is the name the rally has been given.

It is 47 years to the day that the Reverend Martin Luther King Jr staged a rally of 250,000 people to deliver his famous “I Have a Dream” speech at the Lincoln Memorial on 28 August 1963, and people politically to the left of Beck have castigated him for sullying both the date and the location.

I’d argue, of course, that the two protest rallies are inextricably linked by our failure to observe, understand and act upon the veracity of the distributional economic equation P – R = W + I.

Had the economy of Australia prior to 1990 or of the US prior to 2010 not inserted taxation into the equation, there’d have been no economic collapse on either occasion – and no need for such expressions of angst.

Ironically, it was Martin Luther King Jr, not Danny Johnson nor Glenn Beck, who was able to make the necessary connection.  It’s worth putting the whole quote in its quite moderate context below.

“In the treatment of poverty nationally, one fact stands out: there are twice as many white poor as Negro poor in the United States. Therefore I will not dwell on the experiences of poverty that derive from racial discrimination, but will discuss the poverty that affects white and Negro alike.

Up to recently we have proceeded from a premise that poverty is a consequence of multiple evils: lack of education restricting job opportunities; poor housing which stultified home life and suppressed initiative; fragile family relationships which distorted personality development. The logic of this approach suggested that each of these causes be attacked one by one. Hence a housing program to transform living conditions, improved educational facilities to furnish tools for better job opportunities, and family counselling to create better personal adjustments were designed. In combination these measures were intended to remove the causes of poverty.

While none of these remedies in itself is unsound, all have a fatal disadvantage. The programs have never proceeded on a coordinated basis or at a similar rate of development. Housing measures have fluctuated at the whims of legislative bodies. They have been piecemeal and pygmy. Educational reforms have been even more sluggish and entangled in bureaucratic stalling and economy-dominated decisions. Family assistance stagnated in neglect and then suddenly was discovered to be the central issue on the basis of hasty and superficial studies. At no time has a total, coordinated and fully adequate program been conceived. As a consequence, fragmentary and spasmodic reforms have failed to reach down to the profoundest needs of the poor.

In addition to the absence of coordination and sufficiency, the programs of the past all have another common failing — they are indirect. Each seeks to solve poverty by first solving something else.

I am now convinced that the simplest approach will prove to be the most effective — the solution to poverty is to abolish it directly by a now widely discussed measure: the guaranteed income.

Earlier in this century this proposal would have been greeted with ridicule and denunciation as destructive of initiative and responsibility. At that time economic status was considered the measure of the individual’s abilities and talents. In the simplistic thinking of that day the absence of worldly goods indicated a want of industrious habits and moral fiber.

We have come a long way in our understanding of human motivation and of the blind operation of our economic system. Now we realize that dislocations in the market operation of our economy and the prevalence of discrimination thrust people into idleness and bind them in constant or frequent unemployment against their will. The poor are less often dismissed from our conscience today by being branded as inferior and incompetent. We also know that no matter how dynamically the economy develops and expands it does not eliminate all poverty.

We have come to the point where we must make the nonproducer a consumer or we will find ourselves drowning in a sea of consumer goods. We have so energetically mastered production that we now must give attention to distribution. Though there have been increases in purchasing power, they have lagged behind increases in production. Those at the lowest economic level, the poor white and Negro, the aged and chronically ill, are traditionally unorganized and therefore have little ability to force the necessary growth in their income. They stagnate or become even poorer in relation to the larger society.

The problem indicates that our emphasis must be two-fold. We must create full employment or we must create incomes. People must be made consumers by one method or the other. Once they are placed in this position, we need to be concerned that the potential of the individual is not wasted. New forms of work that enhance the social good will have to be devised for those for whom traditional jobs are not available.

In 1879 Henry George anticipated this state of affairs when he wrote, in Progress and Poverty:

“The fact is that the work which improves the condition of mankind, the work which extends knowledge and increases power and enriches literature, and elevates thought, is not done to secure a living. It is not the work of slaves, driven to their task either by the lash of a master or by animal necessities. It is the work of men who perform it for their own sake, and not that they may get more to eat or drink, or wear, or display. In a state of society where want is abolished, work of this sort could be enormously increased.”

We are likely to find that the problems of housing and education, instead of preceding the elimination of poverty, will themselves be affected if poverty is first abolished. The poor transformed into purchasers will do a great deal on their own to alter housing decay. Negroes, who have a double disability, will have a greater effect on discrimination when they have the additional weapon of cash to use in their struggle.

Beyond these advantages, a host of positive psychological changes inevitably will result from widespread economic security. The dignity of the individual will flourish when the decisions concerning his life are in his own hands, when he has the assurance that his income is stable and certain, and when he knows that he has the means to seek self-improvement. Personal conflicts between husband, wife and children will diminish when the unjust measurement of human worth on a scale of dollars is eliminated.

Two conditions are indispensable if we are to ensure that the guaranteed income operates as a consistently progressive measure. First, it must be pegged to the median income of society, not the lowest levels of income. To guarantee an income at the floor would simply perpetuate welfare standards and freeze into the society poverty conditions. Second, the guaranteed income must be dynamic; it must automatically increase as the total social income grows. Were it permitted to remain static under growth conditions, the recipients would suffer a relative decline. If periodic reviews disclose that the whole national income has risen, then the guaranteed income would have to be adjusted upward by the same percentage. Without these safeguards a creeping retrogression would occur, nullifying the gains of security and stability.

This proposal is not a “civil rights” program, in the sense that that term is currently used. The program would benefit all the poor, including the two-thirds of them who are white. I hope that both Negro and white will act in coalition to effect this change, because their combined strength will be necessary to overcome the fierce opposition we must realistically anticipate.

Our nation’s adjustment to a new mode of thinking will be facilitated if we realize that for nearly forty years two groups in our society have already been enjoying a guaranteed income. Indeed, it is a symptom of our confused social values that these two groups turn out to be the richest and the poorest. The wealthy who own securities have always had an assured income; and their polar opposite, the relief client, has been guaranteed an income, however miniscule, through welfare benefits.

John Kenneth Galbraith has estimated that $20 billion a year would effect a guaranteed income, which he describes as “not much more than we will spend the next fiscal year to rescue freedom and democracy and religious liberty as these are defined by ‘experts’ in Vietnam.”

The contemporary tendency in our society is to base our distribution on scarcity, which has vanished, and to compress our abundance into the overfed mouths of the middle and upper classes until they gag with superfluity. If democracy is to have breadth of meaning, it is necessary to adjust this inequity. It is not only moral, but it is also intelligent. We are wasting and degrading human life by clinging to archaic thinking.

The curse of poverty has no justification in our age. It is socially as cruel and blind as the practice of cannibalism at the dawn of civilization, when men ate each other because they had not yet learned to take food from the soil or to consume the abundant animal life around them. The time has come for us to civilize ourselves by the total, direct and immediate abolition of poverty.”

Where Do We Go From Here? Chaos or Community – Martin Luther King Jr.’s final book.