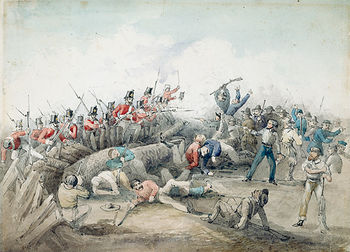 Today, we commemorate, hopefully celebrate, the only armed rebellion in Australia’s history.

In a show of civil disobedience over the cost of their mining licences, thousands of Ballarat gold miners revolted. “No taxation without representation!” was their cry.

Only about 120 remained in and around the scanty ‘stockade’ on the morning of Sunday 3 December 1854 when 276 police and British soldiers cunningly attacked.

The battle lasted only fifteen minutes. 22 miners and 6 soldiers died as a result of the one-sided skirmish.

Those later tried in Melbourne for sedition were released amid public adulation. As a direct result of the rebellion, full male suffrage was achieved for the Victorian parliamentary lower house.

Like almost every rebellion, the battle at the Eureka stockade was fought over the right of a privileged class to levy taxation upon the poor.

By and by there was a result, and I think it may be called the finest thing in Australasian history. It was a revolution — small in size; but great politically; it was a strike for liberty, a struggle for principle, a stand against injustice and oppression….It is another instance of a victory won by a lost battle. It adds an honorable page to history; the people know it and are proud of it. They keep green the memory of the men who fell at the Eureka stockade, and Peter Lalor has his monument.  – Mark Twain (who was to visit the Ballarat goldfields in 1895).