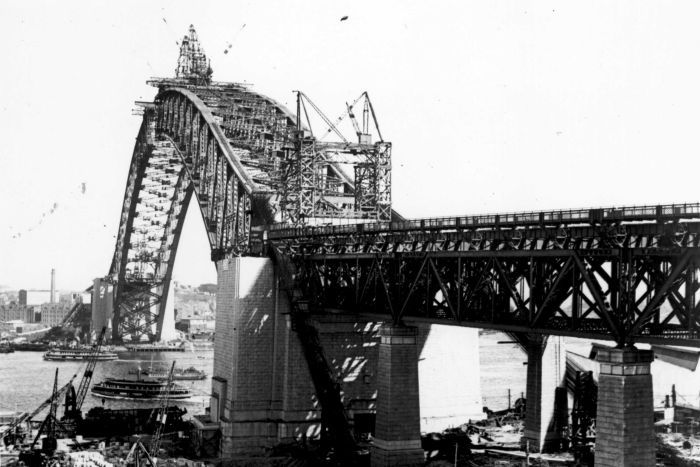 Gary Bowditch: The way that that decision was taken was a very interesting one. It was interesting for one very important reason, and it’s one that we need to be reminding ourselves continually here in 2014, and that is that infrastructure, in this case a bridge, was connected to a broader system, a broader system of the community and in particular the land that it connected.

The decision to go ahead with the Sydney Harbour Bridge was done with some very clear governance frameworks in place, and that was that the decision to proceed with the bridge had to be balanced against the cost to the impact that that would have on the land values on the other side of the city. So while cost benefit analysis wasn’t in fact in place at that time, there was an underlying intuition that if you were to provide a piece of infrastructure, that there would be a cost and there should also be a return, and that social return was reflected in the attempt to say, well, how did land values increase as a result of the bridge? And to the credit of the planners and the decision-makers, that was put in place. And the uplift value that would have occurred on the north shore would have paid for the bridge several times over.

Gary Bowditch: There was a betterment tax that was associated with those increase in land values so that the government, who was paying for the bridge, were able to extract a part of that improved/ unimproved capital value to fund the bridge. So in fact there were two revenue sources for the bridge at the time. One was a fee for the use of trains that would run across it, which was a separate decision but one that was integrated into the broader decision, and the other was the betterment taxes.

Annabelle Quince: Many of the states’ major infrastructure projects were overseen by and funded by state infrastructure authorities, like the Melbourne and Metropolitan Board of Works and the New South Wales Roads and Traffic Authority.

Marcus Spiller: A statutory corporation called the Melbourne and Metropolitan Board of Works was something that was set up in fact prior to Federation, basically to deal with the sewage problem in Melbourne. It was a statutory authority, it was at arm’s length from government, it raised its own rates, it raised its own infrastructure bonds, and it built right through until the ’70s a very comprehensive sewer and sewage treatment system, one that was held up for decades as a world-leading example of engineering in that area.

They also built a magnificent metropolitan parks system where they looked at their drainage management responsibilities but interpreted it more broadly. They turned what would otherwise just be creeks for drainage purposes, they turned them into a wonderful metropolitan parks system. And in the latter days of their operations as a multipurpose infrastructure agency they built the Tullamarine Freeway here in Melbourne, which until fairly recently was a very effective way of conducting people from the airport to downtown, their jobs and homes and so forth. So the Boards of Works is probably a shining example of the way things used to be done.

Annabelle Quince: And you said they raised their own capital, so explain that. How did they get the money to do all that?

So the rates that the Board of Works raised on the back of the properties in the Melbourne metropolitan area, which was quite a large tax base, the revenue from those helped service bond raisings that the Board of Works used to issue from time to time. So from time to time they’d issue Melbourne Metropolitan Board of Works bonds. Mums and dads and indeed institutional investors used to buy up these bonds, which were quite secure, they were backed by revenues generated from property taxes which are highly secure, they are not as prone to economic cycles as various forms of income taxes. And so they were pretty effective at raising capital for their program.

In addition they received funding appropriations from the state government for projects that were of a scale that demanded it. So, for example, if they were building major dams in the catchments well beyond the confines of Melbourne, a project that had a major intergenerational benefit attached to it, the government of the day would also provide capital to the board. But the funds-raising on the back of their independent tax base was quite important.

Marcus Spiller: Yes, well, the model started to change from about the mid ’70s onwards, and there was quite a sharp change in sentiment. I spoke earlier about the post-war reconstruction fervour where we really wanted to build a new future and get to work building the sorts of infrastructures and cities that we needed to really give us a different direction compared to the misery of the war and the pre-war period.

And Keynesian economics ruled the day, that’s the period when people looked to government to invest and to make things happen. By about the mid ’70s, probably signposted by the election of the Thatcher government in the UK and subsequently the Reagan administration, there was a pretty extensive or global critique developing of that post-war model. By then people had started to say, look, government is really crowding out private sector activity, it’s really throttling enterprise and endeavour, it’s really crushing productivity, we’re stagnating, government really needs to get out of the way.

In our country this reform or this critique and the reform initiatives that flowed from it came under the title of microeconomic reform under the leadership of the Hawke/Keating government which started to look at the way we did infrastructure, the way we did regulation, the way we dealt with labour markets.

And so whereas in the post-war period the engineers sort of ruled the roost, from about the early ’80s the sort of accountants and the MBAs took over in the infrastructure space. And whereas previously it was a question of building the best possible infrastructure you could with the resources you had, you now had a more businesslike attitude to the way infrastructure should be provided.

Whereas previously we built a lot of redundancy into our infrastructure because we had this eye to the long-term future, in this new period it was more about making the best possible use of scarce resources and investing as if you were investing in the private sector, you know, you must generate a decent rate of return on the investment within a reasonable period of time. We began to sweat our assets more, use the spare capacity that was in the infrastructure more, starting to make infrastructure investments just in time rather than ahead of time and with spare capacity. So it was very much a businesslike culture and discipline that was brought to infrastructure provision.

Annabelle Quince: From the 1980s onwards, private enterprise started to play an ever-increasing role, not only in building infrastructure but also in owning and managing our infrastructure.