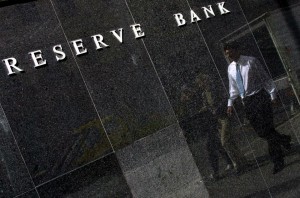 The Reserve Bank of Australia (RBA) is a statutory authority whose duty is to contribute to the stability of the currency, to full employment, and to the economic prosperity and welfare of all Australians.

The RBA sets the cash rate in order to meet a medium-term inflation target. It also issues Australia’s banknotes and manages its gold and forex reserves.

Sometimes it increases the cash rate, the overnight lending rate, and sometimes it decreases it – usually by 25 basis points or 0.25%.

Let’s look at the rationale for increasing interest rates. “The economy is performing too well and has to be slowed.” Oh? It’s the RBA job to put the brakes on a healthy economy? Can it be too healthy?

“There’s incipient inflation that might take us past our target inflation rate.” That’s more like it; but then what has induced these inflationary pressures?  Surely not the ‘velocity of money’? That’s an effect rather than a cause?

Sometimes, in my wild erratic imaginings, I even start to think it may possibly have something to do with the non-productive, or speculative, side of the economy. But then I say to myself: “Self, that could not be right at all, because that’s not what Reserve Bank and all those bright financial analysts tell us.” They say the whole economy must be slowed by making the cost of money generally higher, effectively including people’s mortgages, business loans and venture capital.

Silly me, because the extension of my stupid line of reasoning would have the bank selectively target speculative real estate activity and leave wealth creation efforts alone, instead of making money dearer for everyone! But who really wants to tax speculative rent-seekers or have lower interest rates for businesses, workers and genuine investors – only a killjoy, surely?

Then there are times like these, when the RBA has been busy cutting the cash rate. We’re down to 2.75% here in Oz–not as low as many countries– but we may not have finished lowering interest rates yet. So, what’s going on in this case?

Well, the economy is rapidly slowing down and farmers, shopkeepers and many other businesses are feeling it – so the RBA’s got to help them out with lower interest rates.

But why’s the economy slowing down? Well, many people are in debt, especially mortgage debt, because of the gigantic real estate bubble we’ve experienced, and still the bills keep rolling in. People need assistance with credit.

But aren’t real estate bubbles, by their very nature because they end up bursting, part of the speculative bubble developed by the banking and real estate industries – so won’t the lower interest rates tend to attract more people back into the bubble housing market, acting to stop it from correcting, keeping house prices high? Doesn’t this just aid the banks, not the people?

So it’s the RBA’s job to assist bank profits? But the RBA’s charter, spelled out in the first paragraph above, doesn’t mention this to be its duty. Shouldn’t it be targeting speculators, both on the upside and down, instead of helping them rip Australians off? Is the RBA therefore breaching its charter? No? Why not?

One thought on “QUESTIONING THE CASH RATE SWINDLE”