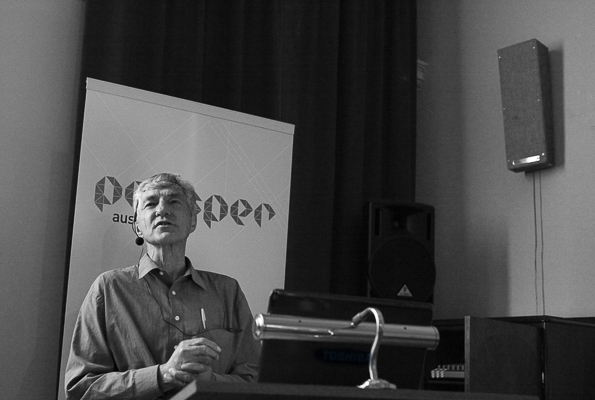 “The problem is we don’t have a Paul Keating or a Peter Costello who is willing to spend a year or two to explain why the current system is broken and why some alternatives will work” stated Professor John Freebairn.

“If you want examples of how to get it wrong, think of what Wayne Swan did with the Resource Rent tax. He sat on it, he went for a Christmas holiday, got his kids to bury it in the sand, and then suddenly announced this is what we’re going to do. The current Treasurer is no better with his budget performance.”

“I have no idea in where we’re going to find a good politician.“

“Today we heard this great story that superannuation is paid by business. Yes they write the cheque to the superannuation fund. But if you’re in a full employment economy (and tax reform is about the long run), superannuation is actually paid by the employee in lower current take-home pay. Business is quite happy to accept that when they pay wages and PAYE taxes, that’s borne by the employee. But it’s exactly the same for payroll tax and for superannuation and for workers compensation. It’s a tough argument to get over, but self-interested rent seeking business groups will go on with this and get away with it. They should not.”

“States can only really place taxes on immobile assets. Land is the obvious one. A good tax system is simple. We should have a comprehensive tax base on the unimproved land value with minimal exemptions. Bring occupied housing into the net, bring primary production into the rent, tax other governments, tax special uses any and have a nice single flat rate, not the progressive rate.”

“The progressive Land Tax rate causes enormous distortions. Australia Post would like to own all it’s post offices. It would have enormous efficiency gains. But it would be a massive landlord paying 2.25% Land Tax. The way it gets out of it is that that it franchises its post office to someone who pays zero or 1% land tax. This creates all sorts of organisational and inefficiency problems.”

“What I am proposing is a revenue neutral package, replace the current land tax, replace the conveyance tax on property, and double the local government rate.“

“Why don’t states engage in tax reform? The rationale is that most of the pain for state tax reform is borne by the states. Most of the benefits would be reaped by the Commonwealth in higher income taxes, with big gains in corporate tax.”

“I do hope we see effective tax reform in my lifetime” finished Freebairn.

The sentiment of the evening was that neither side of Victorian politics were interested in deep seated reform, instead placating the commercial interests that fund their election campaigns.