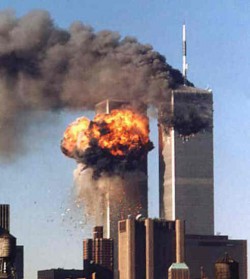 I watched last night Jim Whitaker’s documentary film Rebirth on ABC1.  It chronicled the lives of four people who lost loved ones in the ‘9/11’ attack on  the Twin Towers, and one woman who survived, disfigured.

You quickly came to see it was not only the dead who were victims of the attack.  Those five represented the stories of many thousands of family and friends inextricably linked to the three thousand who lost their lives on that day.

We witness the five pass touchingly through the stages of grief, from denial to acceptance, over ten years, as they moved on bravely with their lives.

As the incredible stupidity of war continues to be waged around the world, it crossed my mind the US experienced its own concentrated black hole of war on that day. It carries unlearned lessons.

But can you protest at machinery,

because it has always seemed to me