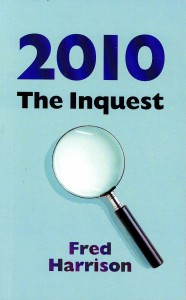 POLITICIANS, THE ECONOMY, AND OURSELVES:  BEYOND HELP?

Barrack Obama’s next major economic initiative is to regulate the errant financial system. Senator Chris Dodd yesterday foreshadowed a Bill that’s going to ensure the US won’t have another GFC.

Fat chance. It will amount to smoke and mirrors, because the internationally accepted rule of the political game is if you want to get re-elected, you must shut up about one big thing: you never challenge those powerful banking parasites and others about their leeching off the public’s land rent.

Harrison’s latest book, “2010 The Inquest”, documents how Tony Blair, Gordon Brown, Alistair Darling, Peter Mandelson, and Alistair Campbell chose to ignore his personal warnings in 1997 and subsequently that a UK residential real estate bubble was about to develop. It would burst in 2007, and the economy would bottom out badly in 2010. He’d earlier correctly forecast the 1992 recession.

Peter Mandelson is the grandson of Herbert Morrison who had broken ranks to move an unsuccessful Bill to shift taxes off peoples’ wages and onto the rental value of land in 1939.

Alistair Campbell, Prime Minister Blair’s spin doctor, had earlier worked with Fred Harrison within the Mirror Group of newspapers and on Today. He replied on 5 February 2003 to another of Fred’s approaches: “I’m a little bemused as to why you believe this country’s economic policy is ‘a shambles’.”

Thanks to Harrison, the truth is now out:  Britain’s politicians and their advisors considered it better the UK suffer the depredations of an economic depression rather than repair the tax system upon which capitalism is based. Here, surely lies the corruption of all corruptions?

Harrison observes that “politicians will provide leadership only if the terms of public debate shift away from the language of séance to the methods of science.”

Gordon Brown didn’t choose the science. He went for the occult. The part he played both as Chancellor of the Exchequer and Prime Minister, illuminates his duplicitous behaviour.

In his first budget speech on 2 July 1997, Brown unfurled his glorious standard: “I am determined that as a country we never return to the instability, speculation and negative equity that characterised the housing market in the 1980s and 1990s.”

Curiously, Gordon Brown’s 1997 budget speech has gone missing from Treasury’s website. His published budgets now commence with his second (1998) speech! Luckily for posterity, Brown’s words from his first budget remain in Hansard to haunt him.

Nevertheless, when challenged by Andrew Marr [of ‘Britain From Above’ fame] in a BBC TV interview on 21 September 2008 for not delivering on his ‘no more boom and bust’, Gordon Brown resorted to bare-faced denial: “The idea that you’re going to rewrite the last 10 years in that way is completely wrong!”

Instead of heeding Harrison’s intensive studies, Brown deferred to his bureaucratic drones and closest economic advisor, Shriti Vadera, whom he’s since elevated to the House of Lords for her fine work.  Brown has somehow managed to resurrect himself as the man who would rescue world economies: they must print money and bail out banks by buying an interest in them.

Harrison’s book will receive publicity in the UK because he’s an incisive and entertaining writer, journalist and economist who has become better known throughout Britain with each release of the many books that followed “The Power in the Land”. In the failing economic climate, he deserves to be introduced to a worldwide audience.

That true economics is indeed a science, not the arcane manifestation which visits recession upon us every 18 years, will surprise the high priests of our failed economics.  They, too, ought to beg, borrow or steal a copy of Harrison’s book if they want to understand why “An economy driven by land speculation rests on unreality.”

There will be many, many books written about the GFC.  None will be more important, nor clinically surgical about the failure of British politics than “2010 The Inquest”.