THE LAW AND TAX

It was US Supreme Court Chief Justice John Marshall (1755-1835) who famously said “The power to tax is the power to destroy.”

Unfortunately, there have been only a handful of lawyers openly prepared to challenge arbitrary taxation imposts as a government revenue base. The alternative to taxation, namely, capture of the rents of nature for revenue, strikes at the very heart of privilege and vested interest from whence top lawyers earn their living. They don’t want to cut their own throats, so it’s difficult to gainsay the leanings of the most powerful people in the profession, even when they’re wrong.

So, except for this few, The Law remains an ass.

Chief Justice John Marshall was influenced by William Blackstone’s “Commentaries on the Laws of England” amongst which are to be found the following words:  “The earth, therefore, and all things therein, are the general property of all mankind, from the immediate gift of the creator. … there is no foundation in natural law why a set of words on a parchment should convey the dominion of land.”

There have been other great lawyers to speak out against taxation, of course, the likes of Justice Louis Brandeis in the US and Sir Samuel Griffith and Justice Rae Else-Mitchell in Australia.

But inertia has carried the day and we’ve seen Australian Taxation Office stationery even bearing the Goebbels-like slogan “Building a better Australia.”  Incredible.

EXAMPLES OF THE DESTRUCTIVE POWER OF TAXATION

Whereas farmers were permitted to pay their land rent in kind, usually rice, under Raffles in colonial Indonesia, colonial powers in Africa used two tactics to keep the native population subservient: “One is to limit sharply the land available to the natives, and the other is to make taxes payable only in money.” (Geography of Hunger, Josue De Castro)

In Population Growth and Land Use, Colin Clark tells us that the second half of Tokugawa Japan (1750 to the revolution of 1868) wasn’t in a state of primitive barbarism despite exchange with foreigners being banned. Japan was largely urbanized and “bore some remarkable resemblances to Baroque Europe. …Taxation was excessive, and there were frequent famines. … both abortion and infanticide were widespread. … The drastic abolition of the old social order must have been welcomed as a great relief.”

Yes, that’s right. Infanticide. They were so financially desperate, they killed their children. That’s taxation under despots.

Today, taxation has become a little more subtle. It removes hundreds of billions of created wealth from those who created it and channels it to the uber wealthy, without requiring us to kill our kids to stay afloat. (That’s done by advancing excessive credit.)

Taxation creates recessions and depressions, but unlike infanticide, economists manage to keep this fact invisible to the public at large and off the front page. That’s the main function of economists: to ignore and hide economic rent, so the wealthy may continue to steal it.

Taxation allows Australian billionaires to protest in the streets claiming “We are paying our taxes, so why do you need your mineral rents?” 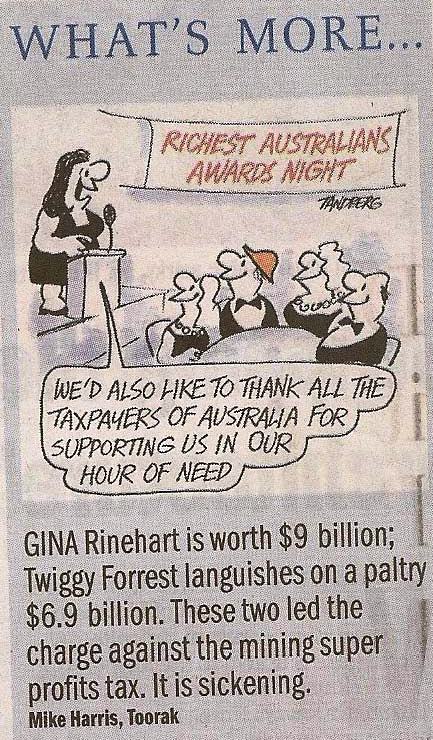