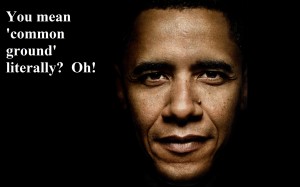 News services yesterday reported President Barack Obama saying members of the G8 will be on “common ground” in seeking solutions to the European crisis at Camp David this weekend.

Although Obama is an economic ignoramus, he is undoubtedly a wordsmith.  A Google search reveals this is not the first time he has used the “common ground” metaphor.

If only he was able to take himself literally, the President has unwittingly uttered the solution to the financial crisis in Europe. (Hey! And in the USA too,  Barack!)

We can no more ‘own’ the land than we can privatise the air we breathe. We may own a house, shop,  factory, office,  or farm buildings, but we may only be granted exclusive possession of the land – on the payment of its annual rent – because we are on common ground.  Anything else is systemic theft.

Let’s look what happens when we fail to capture the rent of land for public revenue:

Yes, Mister President, we are indeed on common ground.

Tell the G8 they need to capture the rent.

Alternatively, keep it metaphorical – and consign us all to an ever-deepening economic crisis.

The decision is yours.