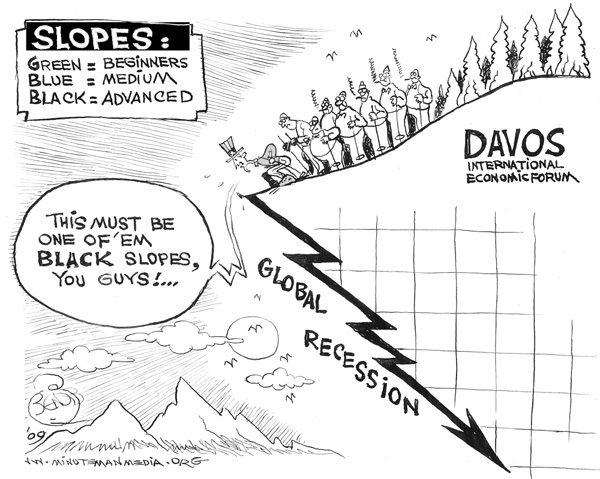 Phew! Good to hear from Davos 2010 last week that things are looking up again. A ‘fragile’ recovery is underway it seems. Looks like I was wrong and will have to pull the plug on this blog!

Not really.  What a cacophony of misbegotten ideas to set world economies aright! Try as I might, I didn’t hear one suggestion that came close to solving the world’s social and economic problems, notwithstanding the presence of Sharan Burrow, the Australian president of the International Trade Union Confederation.

Davos didn’t properly define the cause of the collapse, so it stands to reason that it can’t possibly have a valid response to it.

Banks got a bit of a hammering. While they can’t hold their heads high over their part in the GFC (and many bankers were conspicuously absent from Davos 2010), might I suggest we dig a little deeper than the role bank credit played in the collapse?

Was it banks that caused the decline in real wages ever since 1972, Sharan? No, it was rather the combination of increasing taxation and increasing land prices.

People understand how taxes reduce net incomes: but land prices?  That’s a bit more difficult to explain but, trust me (or else take a peep at Unlocking the Riches of Oz again), there is necessarily an inverse relationship between escalating land prices and real wages. It’s also explained by the equation P = R + W + I (production is the sum of publicly generated land rent, plus private wages and the return to private capital).

So, if real wages are declining and real land prices are heading moonward, OF COURSE people had to resort to taking on greater and greater levels of debt!

Hey, Davos! Here’s a hint: maybe we can create effective demand, pay down debt and abolish impossible land prices if we capture more land rent for revenue, and pay less taxes on our productive efforts! So, stop patronizing us with stupid, interfering solutions! Get out of the way, and out of our pockets!

But that’s not all!  Listening to the entertaining breakfast team of Ross Stevenson and John Burns on radio 3AW this morning, I learn that the superannuation industry isn’t happy taking only 9% of Australians’ wages to make some asset or other favourite in their speculative binges with our billions. They want more – maybe 12%-15%! So, that’s taxes taking, what, a third?; mortgages taking a third; super taking a sixth? I guess that still leaves us another sixth on which to live (i.e. for food, clothing, entertainment, etc.)?

The really sad part is that when Ross and John ran a survey on whether we should pay more, as the super funds are seeking, one third of the respondents said ‘yes’! Sigh!  When will we be left alone to retain the salary we have earned – without the government and super funds demanding we give more and more of it to them?  When will we begin to stand on our hind legs about this enormous con! There’s a natural source for government revenue, fellas! Try publicly-generated land rent!  [Sorry, I forgot: that’s a ‘no-no’!]

Oh!  And I just heard on the news that the federal treasurer, Wayne Swan’s got plans to assist with Australia’s ageing society.  [Isn’t it great the government’s always coming up with these ideas to spend our money?]  Hey! It doesn’t include getting out of our pockets so we can look after ourselves, does it, Wayne?

It’s not stretching the truth to say that current revenue regimes were designed by sociopaths. Here’s a story that might reinforce this proposition.

Edward Gibbon Wakefield’s dad, also Edward, was a rotten father. Oh, yes, he hung around philosophising with John Stuart Mill’s dad, James Mill, but, what with that and his real estate business and his farm, he had no time at all left for young Edward Gibbon.

By age 15, Edward Gibbon Wakefield fulfilled every criterion for a sociopath.  He’d been kicked out of three schools. His mother, not being able to control him, had sent him to his stronger-willed grandmother. When Edward was 11, grandma Priscilla wrote back in 1807: “my mind painfully engaged in the perverseness of dear little Edward – his obstinacy if he inclines to evil terrifies me“. His “pertinacious inflexible temper makes me fear for his own happiness and of those connected with him” He “has a mind that requires delicate handling“.

Whilst in Newgate prison for marrying the second (or was it the third?) heiress he had abducted, Wakefield had this great idea! You could keep the masses genuflecting to the landed gentry if they couldn’t afford the price of a block of land! All you had to do was to set the land at “sufficient price” and they were your slaves! So, you didn’t need convicts in new colonies if you had tax-paying wage slaves who couldn’t afford a block of their own!

The idea was enthusiastically taken up in founding the new, gentrified colony at South Australia.  Although it worked up to a point, it was a bit of a pity that workers were thrown into unemployment within the year and that economic depression ensued.

Nevertheless, Adelaidians still erected a monument to Wakefield and named roads after him, because he was part of the landed gentry, you see, and he foreshadowed the very system to which we adhere today: i.e. let landowners line their pockets with the real wages stolen from those who work and produce. The middle class won’t even understand the process, or, for that matter, why recessions always follow the bursting of land price bubbles.  Just ask all those who attended Davos last week.